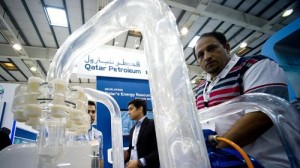 Qatar Petroleum (QP) is taking part in the 9th Middle East Refining and Petrochemicals Conference & Exhibition (Petrotech 2014), which is currently being held at the Bahrain International Exhibition & Convention Centre in Manama on May 19, 2014.
A press release QP issued here today said that QP along with its subsidiary Qatar Petrochemical Company (QAPCO) is a major exhibitor at Petrotech 2014, and the QP stand has attracted a large number of delegates and visitors, many of whom have inquired about the corporation’s operations and its new projects.
The three-day event is thus giving QP the opportunity to raise awareness on its activities and investments in the oil and gas industry.
QP was one of the sponsors and a member of the Executive Committee of the Petrotech 2014, alongside with major GCC and international companies. Also QP is taking a part in the conference with one session about technology utilization with the title of “Integrated Petrochemical Concept – The Way to Maximize Synergy and Optimum Return.” Now in its 9th edition, Petrotech 2014 is organized by Arabian Exhibition Management Company in cooperation with Allworld Exhibitions Company, and the theme of the event this year is “Downstream Value Chain Integration Opportunities.” Petrotech 2014 has attracted the participation of more than 80 companies from all over the world in the oil and gas sector.
The event was inaugurated earlier Monday by Sheikh Ali bin Khalifa Al Khalifa, Deputy Prime Minister of the Kingdom of Bahrain, accompanied by Sheikh Ahmed bin Mohammed Al Khalifa, Minister of Finance and Minister in Charge of Oil and Gas Affairs.
Sheikh Ali visited the QP stand, where he was received by members of the QP delegation, who explained to him the corporation’s ongoing operations during his visit.