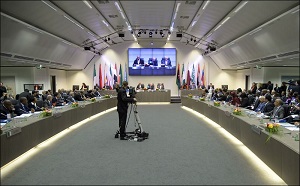 The Ministers of oil in the Organization of Petroleum Exporting Countries (OPEC) began here on Wednesday their 165th ministerial meeting amid expectations of agreement to keep current OPEC production ceiling, 30 million barrels per day, unchanged.
The one-day ministerial meeting aims at determining production levels of OPEC for the rest of the year, discussing issues relative to production levels, prices, non-OPEC oil supplies, and global crude oil stocks.
The meeting will touch upon a paper by the secretariat over projected supply-and-demand during the second half of this year and how member states were committed to their quotas.
The current production of the OPEC crude oil basket is set at 30 million barrels per day.
Earlier, Secretary General of OPEC Abdalla Salem El-Badri stated to KUNA that today’s ministerial meeting might be short due to the stability observed in the oil market.
El-Badri also said that the current price, which is over USD 100, remains sensible and it covers the interest of both producers and consumers.