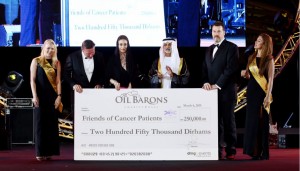 One of the region’s most popular charity events, The Oil Barons Charity Ball (OBCB), which this year raised more than USD 200,000 has been named Best Special Event at the Middle East Event Awards held last night at the JW Marquis Marriott Hotel, Dubai.  Held under the patronage of H.E Sheikh Nahyan Bin Mubarak Al Nahyan, Minister of Culture, Youth and Community Development, The Oil Barons Charity Ball is the largest gala dinner for the Oil and Gas Industry in the Middle East attracting 1,600 distinguished guests, senior industry figures from across the oil producing region.

The charity fundraiser organized by international exhibition company, dmg events Middle East & Asia took place in March of this year and has raised over USD 2.3 million for Friends of Cancer Patients (FOCP), a UAE-based non-profit organization during their eight year partnership. The Ball, a major social date on the Dubai calendar provides guests have the opportunity to bid for ‘one of a kind’ memorabilia during a glitzy evening, with the proceeds going to FOCP.

Simon Mellor, President, dmg events – Middle East & Asia, said: “The Middle East Event Awards 2015 celebrate the outstanding achievements of the region’s events’ industry. Winning the award is a huge honor, and is dedicated to all those in the region fighting their personal battle with cancer.  The Oil Barons Charity Ball has been associated with the FOCP since 2008 and has raised over USD 2.3 million to date for the philanthropic organization. The award is further motivation for the talented staff at dmg events to continue with their exceptional efforts in organizing highly successful and popular events that can contribute towards the development of the local community.”