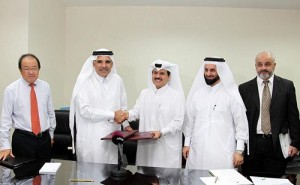 Nebras Power has announced that it has entered into an agreement to acquire Qatar Electricity and Water Company (QEWC) stake in AES Oasis Ltd, which owns a 60 percent stake in AES Jordan HoldCo Ltd, which owns the Al Mnakhir independent power plant located in east of Amman with an installed capacity of 374 MW.
The agreement was signed by QEWC Managing Director and General Manager Fahad bin Hamad Al Mohannadi, and Nebras Power Chief Executive Officer (CEO) Khalid M. Jolo. The signing ceremony was attended by Business Development Director at Nebras Power Faisal Obaid Al Siddiqi and Finance Manager at QEWC Jimmy Chung.
Al Mnakhir power plant project is considered to be the first IPP project in Jordan which was commissioned in 2009. The project sells the electricity generated to National Electricity and Power Company of Jordan through a long term power purchase agreement which expires in 2033.
Speaking on the occasion, QEWC’s Managing Director and General Manager, Fahad Hamad Al Mohannadi said that this transaction comes in line with QEWC’s strategy to invest in the international market through its subsidiary (Nebras Power) of which it owns 60 percent of its shares while QEWC focuses on investments in power generation and water desalination in the Qatari market.
Commenting on the deal, Nebras Power’s CEO Khalid Jolo said, “We are pleased with this accomplishment which is considered another expansion of Nebras Power investment internationally. We would like to thank QEWC for their cooperation to conduct this transaction. Jordan is one of the countries that Nebras Power is looking to expand its investments in as it has continuous growth for power demand and has a well structured IPP program.” Nebras Power company was established in 2014 as a Qatari joint stock company by Qatar Electricity and Water Company (60 percent), Qatar Petroleum International Limited (20 percent) and Qatar Holding (20 percent).
Qatar Electricity and Water Company (QEWC) was established in 1990 as a Qatari joint stock company. QEWC is one of the major companies in the State of Qatar and the Arabian Gulf region which owns and operates a large portfolio of power generation and water desalination stations in the State of Qatar.