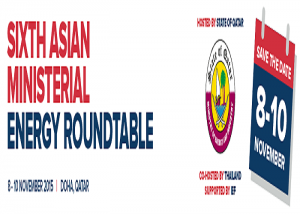 Under the patronage of HH the Emir Sheikh Tamim bin Hamad Al-Thani, the Ministry of Energy and Industry (MOEI) in collaboration with the International Energy Forum will organize the 6th Asian Ministerial Energy Roundtable conference .
The Prime Minister and Minister of Interior of the State of Qatar, His Excellency Sheikh Abdullah bin Nasser bin Khalifa Al -Thani will address the opening session of the conference on 9 November in the presence of the Asian energy ministers and a set of international energy organizations , said the MOEI in a statement today.
His Excellency the Minister of Energy and Industry Dr. Mohammed bin Saleh Al Sada said that the gathering comes at a crucial as the energy sector witnessed developments , notably the most of the world’s reserves of oil and gas comes from Asian countries.
HE the Minister noted that an invitation was extended to 30 ministers from Asian member states of the International Energy Forum to attend the event.
For his part, HE Sheikh Dr. Khalid bin Jabor Al -Thani, chairman of the conference organizing committee affirmed completion of all necessary arrangements to ensure the success of the conference , where he was confirmed participations of most of the ministers in addition to international organizations such as the Organization of Petroleum Exporting Countries (OPEC), the International Energy Forum (IEF), the Organization of Arab Petroleum Exporting Countries (OAPEC) , the Gas Exporting Countries Forum (GECF), OPEC Fund for International Development (OFID) and the International Energy Agency (IEA)