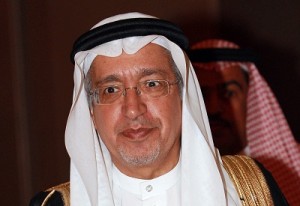 Addressing the opening session, Prince Abdulaziz bin Salman bin Abdulaziz, Assistant Minister of Petroleum and Mineral Resources for Petroleum Affairs and Chairman of the Subcommittee for the preparation of the Saudi program for energy efficiency said that the Kingdom has seen during the past decades rapid economic growth leading to increased domestic consumption of energy at high rates, more than their counterparts in the countries of the world, noting that the rate of domestic demand growth for energy amounted to nearly 5 % annually so that the level of consumption will be doubled the current level by 2030 , unless action is taken about it.
The Prince pointed out that this growth is attributed to the increase in population and economic growth, but a large part of it has been resulted in a lack of efficiency in consumption which led to a waste of energy.

The Prince attributed the establishment of the Saudi Center for Energy Efficiency to the state’s interest in finding practical solutions to cope with growing consumption, which set a national program to rationalize and raise the efficiency of energy consumption and plans to do so in coordination and cooperation between all concerned parties including the private sector, while maintaining the interest of citizens and continued economic growth.
Minister of Water and Electricity opens Saudi Forum and Exhibition for Energy Efficiency 2014, 2 Riyadh
Prince Abdulaziz bin Salman bin Abdulaziz indicated that the program works with technical teams including more than 120 specialists and hundreds of participants in a partial way of more than 20 concerned parties for the development and implementation of sub-programs aimed at improving the efficiency of energy consumption in the sectors of buildings, ground transportation, and industry, which consume 92% of total energy consumption in addition to preparation of 35 sub-programs so far in this regard.

In his speech, the President of King Abdulaziz City for Science and Technology and Chairman of Administrative Committee of Saudi Center for Energy Efficiency Dr. Mohammed bin Ibrahim Al-Suwaiyel said that the energy sector occupies a prominent position in the Kingdom of Saudi Arabia as the main engine for the country’s development and economic renaissance , as this sector is facing major challenges because of the growing consumption locally and globally.
He pointed out that the Center has implemented during the last four years of its inception many tasks topped by the national program to rationalize energy consumption, which seeks to create an integrated system specialized in rationalization and raising the efficiency of energy consumption in the Kingdom.

Then, the Minister of Water and Electricity Engineer Abdullah bin Abdulrahman Al-Husayyin delivered a speech in which he thanked the organizers of Saudi Forum and Exhibition for Energy Efficiency 2014, pointing out that it is targeting one of the most important challenges facing the future of the homeland and citizens to improve our use of energy and address shortcomings in our current reality.
He said the focus on this aspect is crucial in our development march and an important factor in our ability to achieve our goals.
Engineer Al-Husayyin further said that consumption figures of electric power in the Kingdom of Saudi Arabia reveal that consumption growth over the past years reached rates that can be described as astronomical numbers, indicating that its percentage exceeded 15% in some cities, while its average in the Kingdom was about 08 %, pointing that the complex electricity capability reached 60,000 MW.
At the conclusion of the opening ceremony of Saudi Forum and Exhibition for Energy Efficiency 2014, the sponsors and support agencies of the awareness campaign organized by the Saudi Center for Energy Efficiency were honored.
Following that, the Minister of Water and Electricity, Princes and Ministers, toured the exhibition accompanying the Forum which is being held under the title (You Can .. Cut Your Bill Through Your A/C).
The event was attended by Princes, Ministers and a number of those interested in energy and its efficient use from government and private agencies.