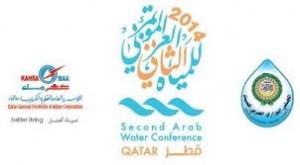 Kuwait’s Minister of Public Works and Minister of Electricity and Water Abdelaziz Abdelletif Al-Ibrahim arrived in the Qatari capital late on Monday to take part in the Second Arab Water Conference scheduled to get underway on Tuesday.
In a statement to KUNA upon his arrival in the Qatari capital, minister Al-Ibrahim confirmed that the planned convention was aimed to discuss diverse water issues and coordination among Arab states during regional and international forums that deal with water questions.
He indicated that the conferees would exchange experience on water rationing distillation and technologies in addition to aspired water sharing projects.
The minister was received upon arrival by the Kuwaiti Ambassador to Qatar, Met’eb Saleh Al-Mutawtah, and officials.
Shortly before his arrival, Kuwaiti and Arab officials held preparatory talks ahead of tomorrow’s conference, due to tackle closer pan-Arab cooperation to preserve water resources in the region.