GCC countries will save four billion barrels of oil 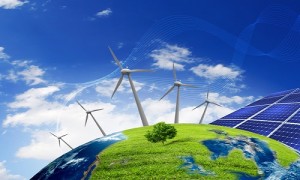 Meeting renewable energy targets in GCC countries would save four billion barrels of oil and reduce emissions by 1.2 gigatonnes between now and 2030, said a report from the Abu Dhabi-based International Renewable Energy Agency (Irena) ahead of the upcoming World Future Energy Summit (WFES).

The soon-to-be released figures equate to 25 per cent less annual fossil fuel consumption in the power and water sector in 2030, and an 8 per cent overall reduction in per capita carbon footprint over the next 15 years. Nearly three-quarters, 74 per cent, of the anticipated 69 gigawatts of renewable energy produced in the GCC will be generated in Saudi Arabia.

The numbers will be published in an upcoming GCC Renewable Energy Market Analysis slated for release at WFES 2016, where global industry leaders will be coming together to seek the increasing market opportunities brought on by the region’s continuous investments in renewable energy.

The Irena figures also show that because renewables, in particular solar photovoltaics, can be less water intensive than fossil fuel technologies, reaching targets would reduce consumption by 18 trillion litres, or 20 per cent, of water annually, and create roughly 130,000 direct jobs per year from now until 2030.

Part of Abu Dhabi Sustainability Week and hosted by Masdar, WFES is an annual platform where the best and brightest minds come together to exchange ideas, explore the latest developments, and address challenges in the future energy arena.

“The global energy system accounts for some two-thirds of greenhouse gas emissions today. Transitioning rapidly to a global system fuelled by renewable energy is the single most effective way to decarbonize the global economy and keep global temperature rise to 2 degrees Celsius, but the pace and scale of change needs to increase,” said Irena Director-General Adnan Z Amin. “Important gatherings like the World Future Energy Summit provide critical platforms for the knowledge-exchange needed today to advance renewable energy in the region and around the world.”

Topics covered will range from addressing challenges faced by the region’s utility providers, and innovative approaches to financing renewable projects, to trends that will shape the industry over the next two decades, and a country spotlight on Egypt’s solar and wind markets.

The 2016 running of the event will also see the launch of ‘WFES Solar Expo’, a dedicated area on the show floor for showcasing solar technology and innovation, helping governments to meet ambitious targets for renewable energy.

Sustainability Business Connect, a tailored networking program designed to bring buyers and sellers together, will be back again in 2016, enabling new business to flow smoothly and successfully across WFES and its partner events. In the last running of the event, more than 1,800 meetings were organized, with strong representation from key government ministries and authorities from across the MENA region.

Looking specifically at how water and waste can be used as renewable sources of energy, the International Water Summit (IWS) and EcoWaste will be co-located with WFES. A unique global platform for promoting water sustainability and efficiency, IWS will bring together world leaders, field experts, academia luminaries, and business innovators to accelerate the development of new sustainable strategies and technologies.

Held in partnership with Tadweer, EcoWaste will address the region’s urgent waste disposal challenges and needs in the quest for sustainable development and environmental protection.