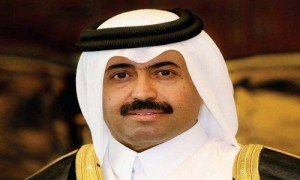 HE Minister of Energy and Industry Dr Mohamed bin Saleh Al-Sada held several meetings in Moscow with senior officials in energy industry, on the sidelines of the 14th International Energy Forum (IEF) which kicked off in Moscow on Thursday.
HE Al-Sada met Kuwait’s Oil Minister Ali Al Omeir and discussed with him bilateral relations in energy field, in addition to several issues of mutual interest.
In another meeting, His Excellency discussed with Kazakh Oil & Gas Minister Uzakbai Karabalin a number of topics related to joint cooperation in energy sector.
HE the Minister of Energy and Industry conferred, as well, with Chairman of the Gazprom Board of Directors Viktor Zubkov, who is also Russian President’s Representative for Cooperation with Gas Exporting Countries Forum.
The meetings were attended by HE Qatar’s Ambassador to Russia Saud Abdullah Zaid Al Mahmoud, in addition to members of the delegation accompanying HE the Minister.
HE the Minister of Energy and Industry participated in the Forum’s opening, which its first session was held under the title: “The New Geography of Energy: Business as Usual or a New Era for Energy Supply and Demand?, while Its second session focused on “Unconventional Oil and Gas: Outlook, Risks and Potential”.