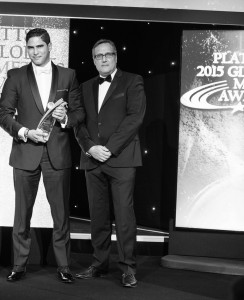 Egyptian Steel was named the Rising Star of the Year at the 2015 Platts Global Metals Awards, held in London on May 21. Hosted by Platts, a leading global energy, metals and commodities information provider, the annual awards programme honors exemplary performance in a dozen categories spanning the entire steel, metals and mining complex.

Judges appreciated that Egyptian Steel was strategic in its search for a competitive edge. The company used one of the top global suppliers of steel production lines, to build out its plants. By employing endless rolling, an advanced, eco-friendly technology that transforms scrap into rebar in just two hours, it was able to offer a competitive price for a quality product. Though judges noted that Egyptian Steel “operates in very difficult geography,” it was also strategic in its choice of production plant locations, situating them on the Mediterranean Sea, the Suez Canal and the River Nile, substantially reducing transportation costs. Egyptian Steel currently has two operational plants with two more scheduled to come online in 2015 and 2016. The company forecasts total production to represent 20% of Egypt’s market share by 2017. Judges remarked that Egyptian Steel’s success is “even more impressive given Egypt’s challenging geopolitical environment,” where the steelmaking sector has become more integral to the economy as tourism has decreased. As the country works towards a comeback, this young company has emerged as a leader of “New Egypt.”