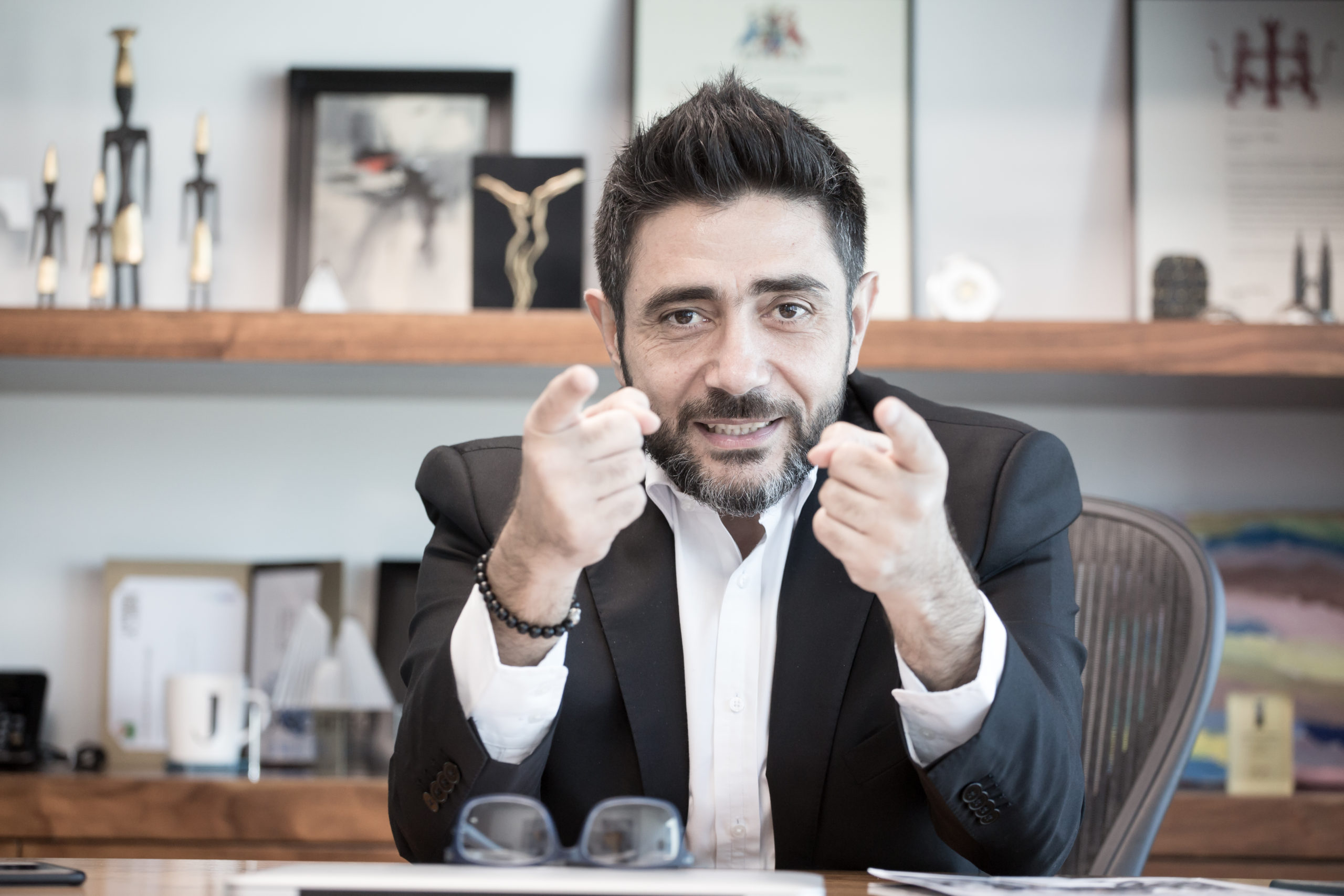 In conversation with Joe Tabet, founder of JT+Partners, on lessons learned, chasing dreams, and how to level up yourself with challenges

Joe Tabet fidgets in his armchair as he recalls a vivid moment in his past when he was sealing envelopes –75 of them, to be precise– in front of an Emirates Post branch in Dubai. The year is 2002, and the 20-something Tabet was sending his professional bio to 75 addresses of architecture and design firms across the UAE. Having just arrived from Lebanon, he remembers having only US$500 to his name. “A local man who worked there told me, ‘Son, I see that you are searching for a job, and that you are eager to find a job, and you will, for sure, get a job with what you have in your hands,’” Tabet says. “Then, I started receiving phone calls, but I said that I didn’t leave my family and my country to get just any experience, but that I needed to get the right experience. I chose an international company with the lowest salary I had ever had, because I was able to see what I needed to start with, in order to fly later on.” And Tabet’s career has certainly taken wing since then- today, Tabet is the founder of JT+Partners, a multi-disciplinary consultancy in architecture, master planning and integrated design practices with three offices –Dubai, Abu Dhabi, and Beirut– and projects around the world, from Morocco to Seychelles, from India and Sri Lanka to Portugal, from Greece to the whole of Middle East and many African countries. Tabet looks to be in good spirits when mentioning his 70-person team, who he credits as have the driving force in increasing JT & Partners’s revenue more than six times since launching the company in 2015. 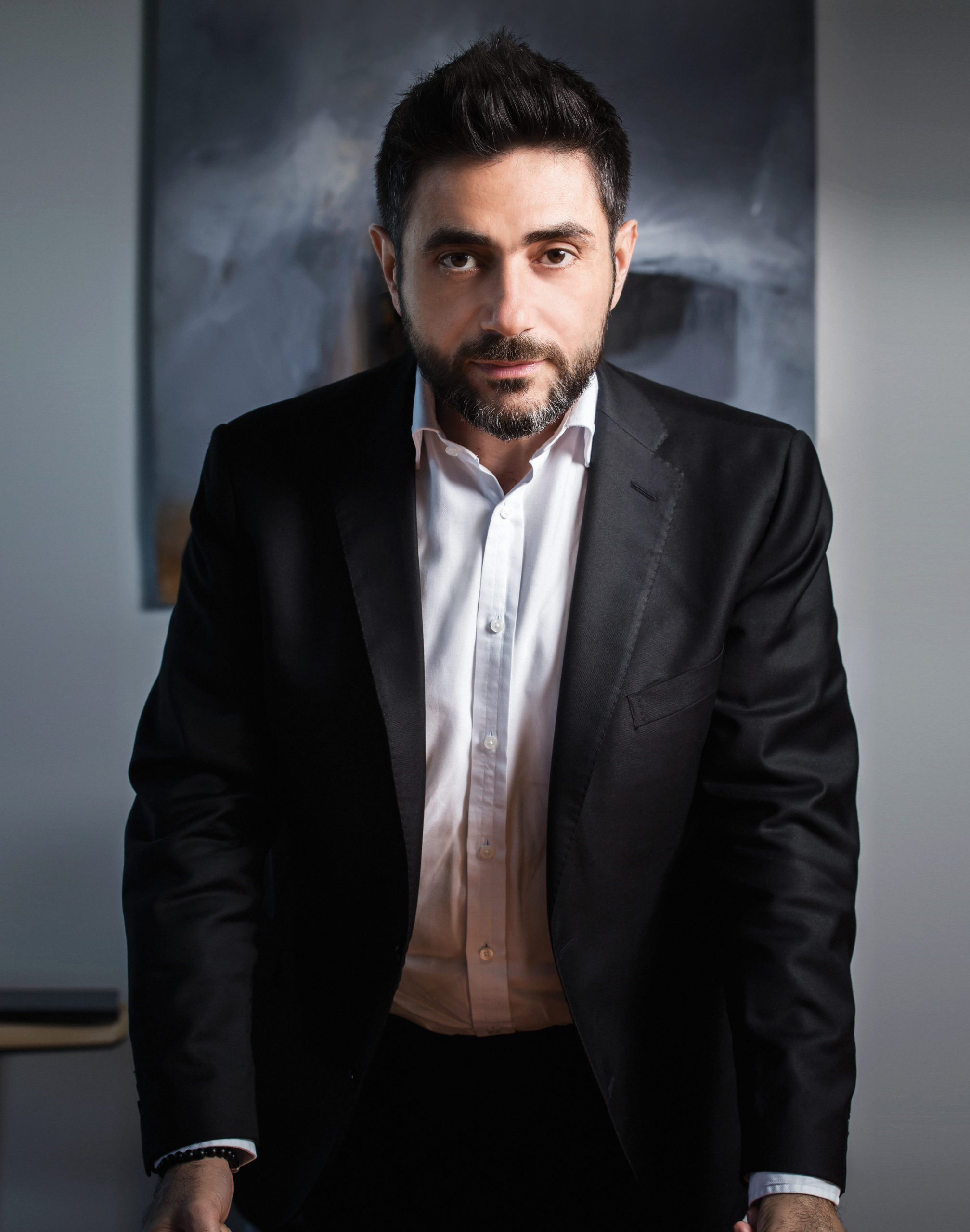 “All this has been created in just five years,” Tabet says, his humility allowing him to showcase only a tiny bit of the pride that he must actually feel. As I sit with Tabet in a conference room at JT+Partners’ office in Dubai, I can only imagine the range of thoughts and emotions that might be coursing through him as he takes me through his career trajectory. His story starts with him spending 12 years at Atkins, a UK-headquartered architectural design, engineering and project management consultancy- that’s the amount of time it took for that young man with 75 envelopes climb to the position of regional director for the Middle East at that company.

“It was a boom in Dubai [in 2002], and we were very lucky at that time because, as architects, we got to experience building a city from scratch,” Tabet remembers. “It was a blank urban fabric, an open desert, and we, architects, came with our creativity (and our ego, which you need to be careful with in case it starts affecting you and others), and got an opportunity to work on many big projects. Then the 2008, financial crisis happened, and that was another type of experience. We lived through a boom, and now we had to live through a recession. The crisis pushed us to go internationally, so we looked at Pakistan, India, Sri Lanka, Azerbaijan, which gave us an understanding of how different cultures look at architecture and design. I am thankful for experiencing these different things, going up, then down, and then up again, which means that I have learnt some valuable lessons. I believe that the recession, merged together with my personality and creativity, allowed me to reach a new level.”

Tabet also radiates an air of honesty in that he is not afraid to share insights other people selfishly keep quiet about. “One of the things that pushed me up quickly at Atkins was getting rid of my position, which simply means delegating your responsibilities to the people below you,” he says. “They will go up, and you will go up. However, in corporations, you will find the opposite. Ask senior people to give their responsibilities to the people below them, and they won’t, because they feel insecure.”

It is this self-conviction and accurate perception that made him sense when a time to move on from Atkins had come. Being 41 at the time, he says, allowed him to make a deal with himselfhe could try building a business for, say, four years, and if it did not work out, he would be 45, and thus still able to go back to the career he had already had. Talking about the day he decided to take the leap into entrepreneurship, Tabet says, “I woke up in the morning and felt that something was wrong. On the way to the office, I called my mum, and she told me on her own, ‘My son, anything that bothers you in life, just shut it out.” That was in November 2014. I went to the office, I was working, and at about noon, I left everything, walked out of my office straight to the CEO’s office, and told him, ‘I believe that today I’m going to resign.’ We had 10 seconds of silence. He asked me about other job offers, but I had none.” Interestingly, Tabet does not shy away from advising his team to follow in his footsteps when it comes to following their personal goals and aspirations. “I always tell them that if you wake up in the morning and you’re not happy with where you’re going, just resign,” he says. 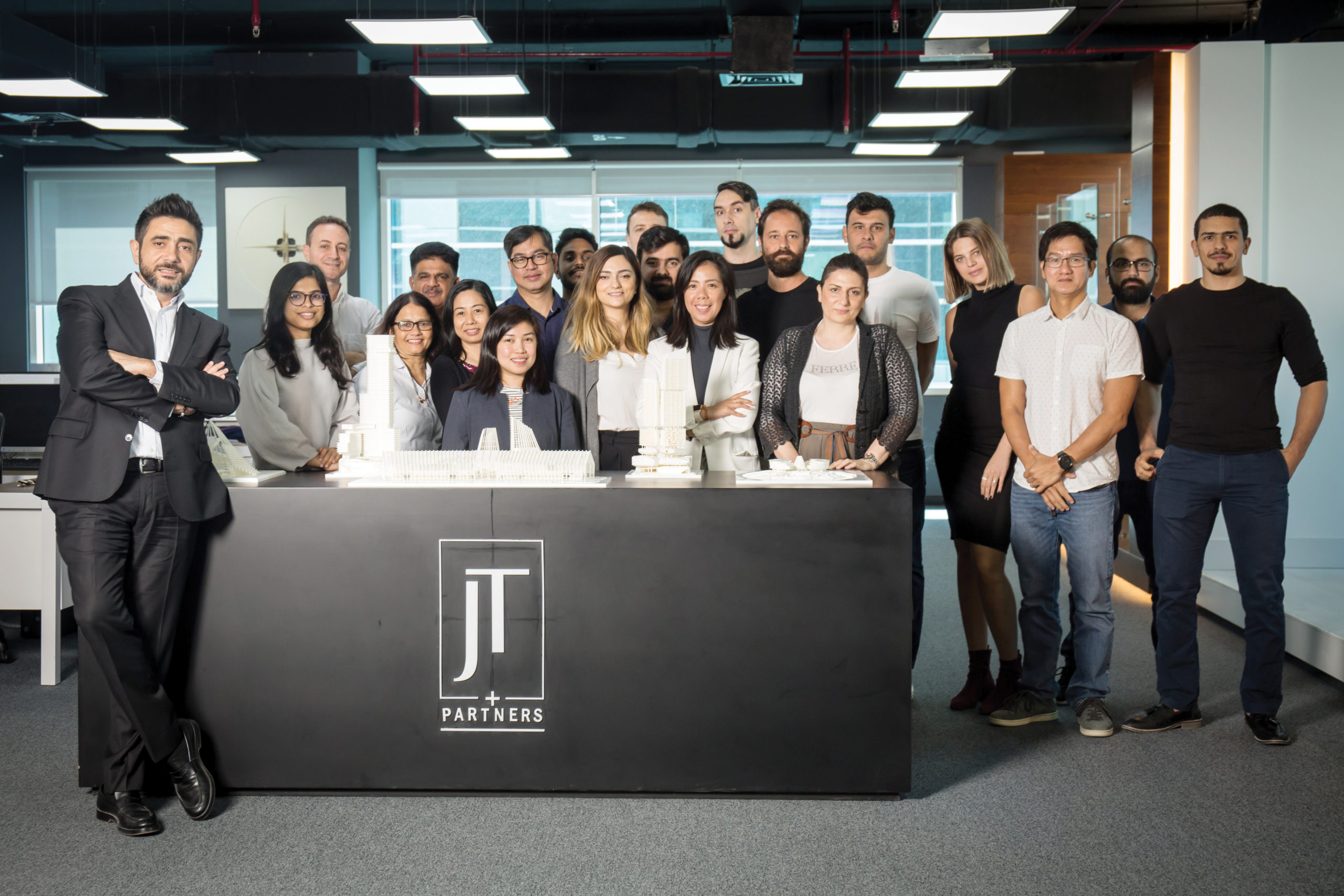 Emerging from the very first phase of starting up a business unscathed is hardly possible for anyone, and Tabet is no exception. “We started working from the lobbies of a couple of hotels, then we got our office, and throughout all that time, I was a tea boy, a PRO, an architect, a lawyer, an accountant, and so on,” he says. “That lasted for six months. I gained a lot of weight and I looked like I hadn’t slept for ages. I was looking at the unforeseen, but there was something from the background driving all this passion and emotions. I was at the age when you can take the risk blindly.”

However, it was a few crucial decisions he made that would determine his strategy and consequent business success. “When it comes to hiring, I took a decision that I wanted people who had never been in the GCC before- I brought in new blood,” Tabet says. “Then, one of the main challenges was that clients used to tell me, ‘We know you as Joe Tabet at your previous employer, but not as Joe Tabet at JT+Partners.’ So, from day one, I decided that my portfolio would not include my previous work, so, we even did some free projects, because we had to build our portfolio step by step.” But the most important decision Tabet made was for JT+Partners to focus on international projects from the start. “I believe that’s what makes us strong until this day,” he says. “From day one, we took the UAE as a base, because having the UAE experience has made us and our clients confident, but we have served the world from here. So, our focus has been on the outside, and whatever came from within the country has been a plus.” Today, his company’s roster of clientele includes Abu Dhabi Crown Prince Court, NCT&H, Al Ghurair, Al Marjan Island LLC, Al Hamra Real Estate, Anwa Group, Giga Group, Shalimar Group, Jumeirah Group, Marriott Group, Hilton Group, EMAAR, Aldar, Pennyroyal, and several others. Many of his clients, Tabet says, cannot believe how much JT+Partners has achieved in just a few years. “It’s all about the team, and it’s not about the number of people that you have, but their mentality, because we eliminated negative energy,” he explains. 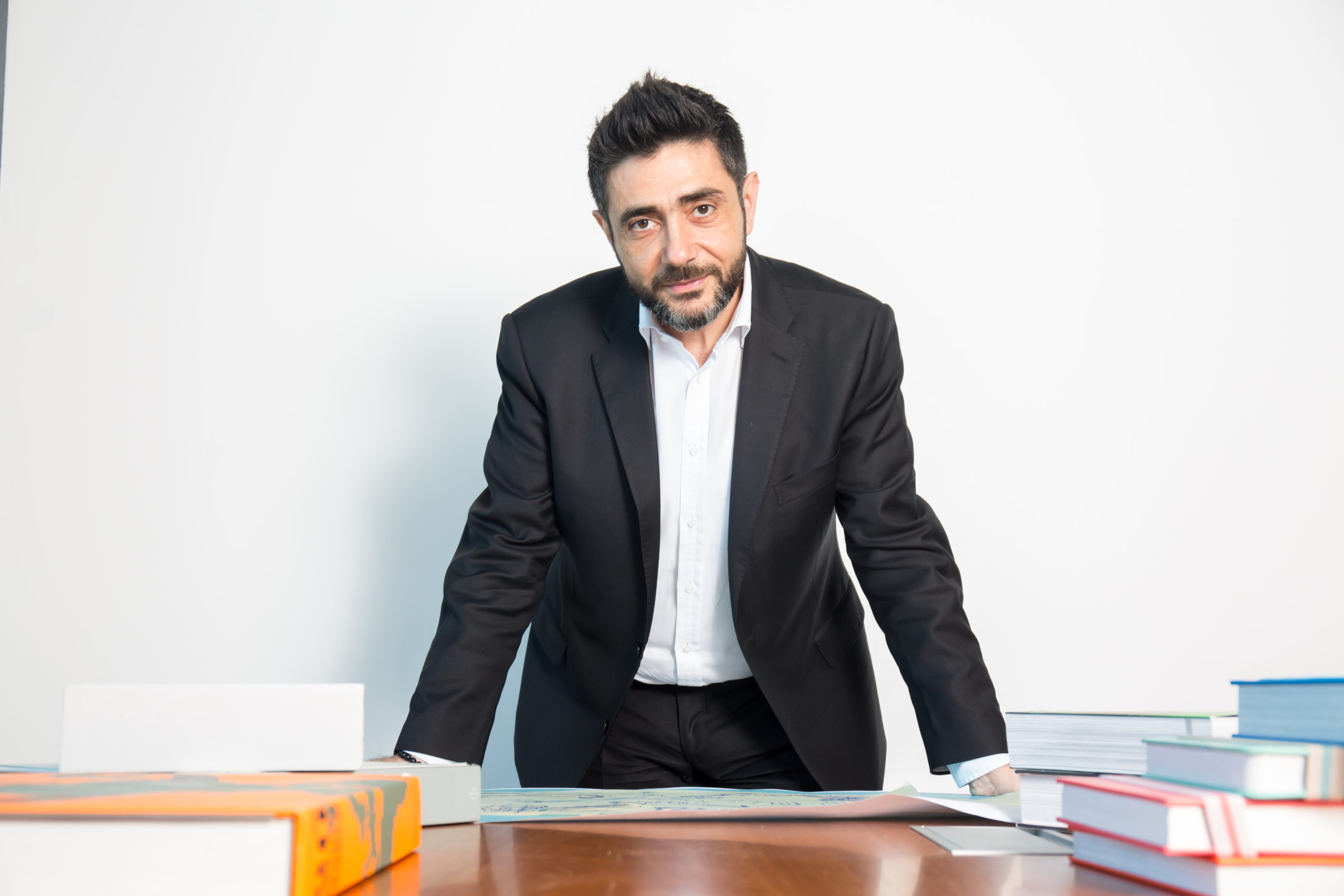 “I used to be in a corporate business, and I used to spend 60% of my time managing politics, so here, over the last four and a half years, I’ve let go of people who didn’t fit into this. We are creative people, and we get damaged by negative energy. The environment is very important. That’s why our staff turnover is very low.” The last five years have been challenging but constructive, and now, he says, it’s all about navigating the growth phase of his business carefully. “We have created a company that has gone international, and now competes with international names, and now, the whole challenge is to keep it up,” he says. The COVID-19 pandemic changed the world on all aspects – political, social, economic, religious and financial. This troubled and trying time is a huge challenge for any business to overcome. “In order to overcome this challenging period of COVID-19, we need to bring our team on board as part of the decision making across all levels and open communication, clarifying each step. Together, we are stronger. Next, we need to get closer to our existing clients and help them so they can help us in the near future and beyond. Then, we need to have a proper vision and mission for the next two to three years and plan everything around it from business strategy to financial situation.

Lastly, we need to keep chasing work in different geographies. Survival maybe for the fittest, however, I learned through the years that those who are flexible and adaptable to the situation and “think outside of the box” are those who thrive, flourish and succeed,” explains Tabet. Giving back to the community, Tabet tells me firmly, is a must. A moment later, he adds, “It’s not allowed to any successful entrepreneur not to give back to the community in one way or another. You’ve been given, then you have to give back. Then, you get more, and then you need to give even more.” Nothing more to add, nor to ask- I couldn’t have asked Tabet for a better conclusion to our interview than this.

Hampton by Hilton Resort, by JT+Partners