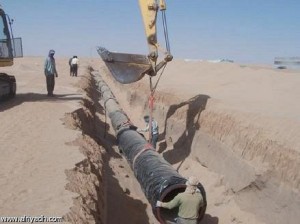 The sector of water and sanitation forms one of the most vital services being attached with a great attention by the Government of the Custodian of the Two Holy Mosques King Abdullah bin Abdulaziz Al Saud.

In a report issued recently and a copy thereof received by the Saudi Press Agency (SPA), the General Directorate of Water in Madinah confirmed the unlimited support given to it by the Saudi Government for the implementation of water and sanitation projects to meet the infrastructure needs of the different cities and provinces and villages in Madinah region while accompanied by ambitious future plans.
The report pointed out that the total costs of all these vital projects in Madinah sectors of water and sanitation amount to more than four billions and four hundred million riyals.