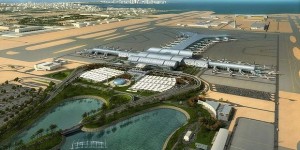 HE Minister of Transport Jassim bin Saif bin Ahmed Al-Sulaiti said Hamad International Airport (HIA), which was partially opened on Wednesday, embodies the sound vision of HH the Father Emir Sheikh Hamad bin Khalifa Al-Thani and HH the Emir Sheikh Tamim bin Hamad Al-Thani in making Qatar a modern state that matches developed countries in its economic and tourism achievements.
“The directives of HH the Father Emir, HH the Emir, and HE Prime Minister and Interior Minister Sheikh Abdullah bin Nasser bin Khalifa Al-Thani greatly influenced the realization of this achievement that will be a source of pride for each Qatari as one Qatar’s huge developmental achievements and a gateway to global tourism,” QNA quoted HE the minister as saying.
He added that HIA is a significant achievement within Qatar National Vision 2030 and the comprehensive development plans in the country, noting that the airport is now complete as it started to operate with the landing of a Qatar Airways plane and others that followed.
He pointed to the services and facilities at the airport, which he described as one of the best and most modern in the world. “Future plans include the expansion of Terminal 2 to accommodate other carriers, so that the current building would be devoted to Qatar Airways.” The old Doha International Airport buildings will house Qatar Aeronautical College and Gulf Helicopters and parts of it will be turned into green areas, the minister added.
Responding to a QNA question on whether construction work at the new airport had negatively affected Qatar Airways, HE Civil Aviation Authority Chairman Abdulaziz Mohamed Al Nuaimi acknowledged the airliner was indeed affected in terms of expansion and the acquisition of new aircraft, saying that Qatar Airways will now return to its former ambition and speed in the execution of plans and programs.
Asked if the airport’s steering committee will continue its current duties or assume other tasks at the new airport, Al Nuaimi said it will carry on present responsibilities until the 2022 World Cup, noting that a third phase of the airport is still under construction as well as an airport city that will include a railway station, a market and a terminal.
HIA’s current capacity is 30 million passengers while it is planned to be 50 million with the view of another expansion of up to 70 million, Al Nuaimi said, noting that Doha International Airport was designed to accommodate nine million passengers but it was able to take 19 million. The new airport will bring huge economic benefits to the country, he said, pointing to the prosperity of tourism and economy as potential outcomes as well.