Mattar Al Tayer, Chairman of the Board and Executive Director of the Roads and Transport Authority (RTA), announced that construction works of internal roads had been accomplished in 13 residential districts costing about AED 552 million, and works were continuing in constructing internal roads in five residential areas costing about 319 million dirham. He revealed that the RTA would release next November a tender for a project constructing roads at Al Khawaneej 2 and Nad El Sheba 4, and would undertake internal road projects in five other districts in 2016. 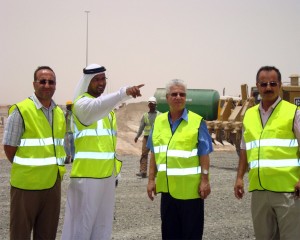 “These projects are part of the 5-Year Plan (2012-2016) endorsed by His Highness Sheikh Mohammed bin Rashid Al Maktoum, Vice-President and Prime Minister of the UAE and Ruler of Dubai, costing more than one billion dirham. The plan underscores the keenness of HH to improve and upgrade internal roads to meet the demographic and urban expansion in the Emirate,” he said.

These included construction of roads at Al Qusais 3 extending 6 km in addition to street lighting works, and pavement of parking slots for some mosques and public schools in the area. It also completed the construction of roads extending 8 km at Al Quoz 4 and lighting works, parking, and rainwater drainage services in addition to internal roads extending 6 km at Hatta community,” elaborated Al Tayer.