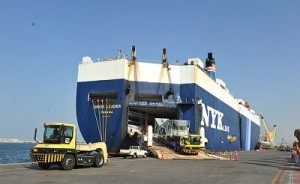 The four TBMs – Al Mayeda, Al Khor, Lehwaila and Al Wakra, were manufactured by Germany’s Herrenknecht and will be used for the Red Line North and South Underground projects.

Al Mayeda and Al Khor will be used for the Red Line North Underground. The Design and Build (D and B) for this project will be undertaken by a joint venture (JV) led by Italy’s Salini Impregilo and comprising South Korea’s S. K. Engineering and Construction Co. Ltd, and Qatar’s Galfar Al Misnad Engineering and Contracting W.L.L. A total of four TBMs; Lebretha Al Mayeda, Al Khor and Al Bidda, are proposed to bore the required rail tunnels for the Red Line North project.

Lehwaila and Al Wakra will be launched into service for the Red Line South Underground project. The D and B for this project will be undertaken by a JV led by the French-Qatari company QDVC and comprising of South Korea’s G. S. Engineering and Construction and Qatar’s Al Darwish Engineering. Five TBMs, named Lehwaila, Al Wakra, Mushaireb, Doha and Al Zubara, will be utilized for the tunneling on the Red Line South Underground project.

Each TBM will travel a distance of between 7-9 km and will take approximately two years to complete their respective journeys. The TBM average speed will be between 12m/day to 21m/day, depending on ground conditions. Daily excavation quantity will be over 600m?, with an estimated predicted total excavation quantity of over 5,000,000m?.

Each of the TBMs for the Doha Metro measures 7.05m in diameter and 120m in length. To ensure transportation is successfully managed from the Doha Port to the respective construction sites, the TBMs are dismantled into smaller sections which enable easier transportation.

It will take a few months to re-assemble all 4 TBMs into complete machines and Qatar Rail will provide regular updates in the newspapers on the progress every time the company receives a new TBM.

TBMs are ideal for Doha; they interfere very little to the vibrant and active city life. Needing only one point of entry, they can tunnel below the city streets, practically unknown to the population above. They are also ideal for longer lengths of uninterrupted tunneling, as is required for the Doha Metro project.
Qatar Rail has expressed appreciation and special thanks to its team working on the Red Line North and South projects, and also to the Doha Port team who unloaded each of the sections; the Customs Department for their quick response in clearing all necessary formalities; and to the Civil Defense who safely escorted the sections to the construction sites.

The scope of work for Red Line North Underground comprises the design and construction of approx. 13.4km twin-bored tunnel, including seven underground stations, between the proposed Musheireb Underground Station and Doha Golf Course via Doha West Bay. The tunnels will be built at an average depth of approximately 20 meters below ground.

Qatar Rail is awaiting the delivery of a further 16 TBMs – these will arrive in a Qatar over the coming months, to be utilized between the Red Line North, Red Line South, Green Line and Gold Line Underground projects.