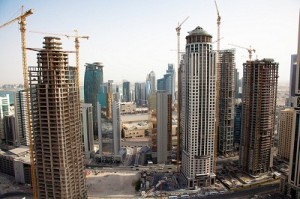 Qatar construction industry’s business optimism in the second quarter of 2014 is at its highest for three years, according to a survey by a private index.
The BOI score of 54 for Q2 2014 was three points up from Q1 2014 and 13 points up from Q2 2013. Higher scores for selling prices, net profits and hiring drove the overall result for Q2 2014.
Dun and Bradstreet’s Business Optimism Index (BOI) also reveals finance, real estate and business service sector has recorded their second highest optimism score since the first quarter of 2011.
Sponsored by the Qatar Financial Centre Authority (QFC Authority) in partnership with the Qatar Businessmen Association (QBA), the survey also reveals the score for the finance, real estate and business services sector was 18 points higher in Q2 2014 than in Q2 2013.
The sector’s rise stems from the strong Qatari economy, higher demand for insurance for new construction and an increase in savings and investment by a growing population.
Within this sector, the outlook for finance and insurance firms was stronger than for real estate and business services firms on volumes, new orders and profits.
The index for the consolidated non-hydrocarbon sector was 47 points, which was up seven points year-on-year but showed a decline of two points from Q1 2014.
The decline was mainly due to seasonal factors, specifically the impact of the coming summer season on sectors such as Trade & Hospitality and related services, such as event management.
QFC Authority Deputy Chief Executive Officer Yousef Mohammed Al Jaida said, “This latest BOI Survey shows that Qatar’s Finance, Real Estate and Business Services sector continues to strengthen.
“No fewer than 64% of respondents in the sector expect higher profits in the second quarter of 2014. Construction is emerging as a major force behind the sector’s growth as well as boosting Qatar’s economy more generally. These trends are further evidence of the extent to which the economy is diversifying.” On behalf of the Qatari Businessmen Association, Sheikh Mohammed bin Faisal Al Thani said, “Qatar’s private sector is committed to playing a productive and entrepreneurial role in the development of our nation’s economy, as set out in the Qatar National Vision 2030. It is clear from the BOI Survey for Q2 2014 that, on measures such as investment, employment and profitability, Qatar’s businesses are fulfilling that role.” Commenting on the findings of the most recent survey, Dun and Bradstreet South Asia Middle East Associate Director Prashant Kumar said, “The BOI in Q2 2014 for the non-hydrocarbon sector has improved by seven points on a year-on-year basis, reflecting an increasing optimism amongst the business community in Qatar.
Construction is the most optimistic. It has the highest BOI score as well as the highest proportion (49%) of businesses planning to invest in business expansion.
Positive expectations for the Construction sector are driving the optimism amongst businesses in other associated sectors, with around 65% respondents in the non-hydrocarbon sector expecting an increase in sales volumes in the next quarter.”