Abu Dhabi Real Estate Transactions in April increased by 34% up to AED 6.3bn compared to the same period last year

Statistics released by the Department of Municipalities and Transport today revealed that the value of real estate transactions in Abu Dhabi has been increased by 34% to reach AED 6.3 billion by the end of last April, through 2617 real estate deals, compared to AED 4.6 billion through 1840 deals during the same period last year.

Statistics of the Department of Municipalities and Transport also showed that the value of the of buying and selling operations in April 2020 reached about AED 2.5 billion, which was made through (1447) transactions, compared to AED 2.8 billion during the same period last year, through (1242) transactions. 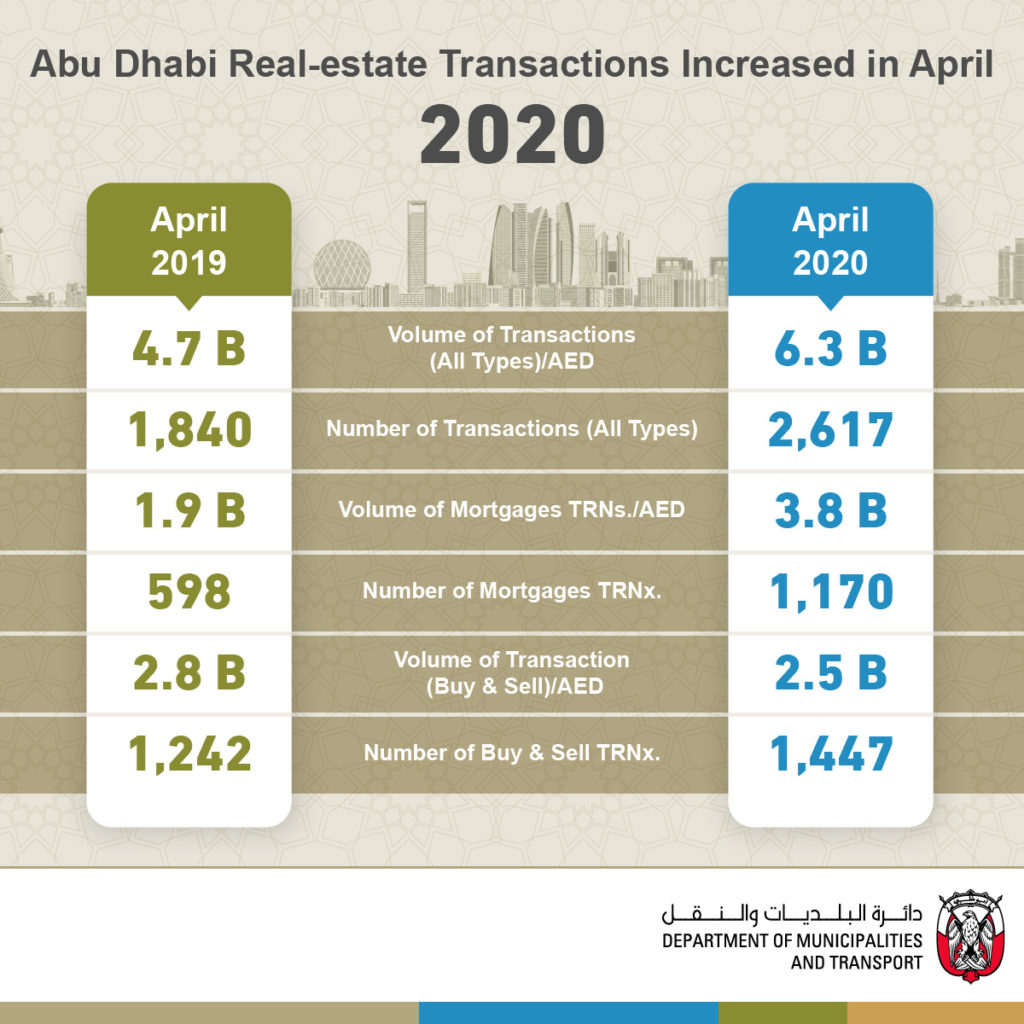 H.E. Dr. Adeeb Alafeefi, Managing Director of the real estate sector in the Department of Municipalities and Transport, said: “Based on the directives of the wise leadership to support the business sectors during these exceptional circumstances, Abu Dhabi real estate market has maintained its vitality, position and excellence despite these unprecedented repercussions caused by the novel coronavirus (Covid-19) on the global economy and its repercussions on real estate markets around the world. ”

His Excellency added: “The incentive plans launched by the UAE government and the economic support plan of the central bank along with the economic incentives package launched by of Abu Dhabi Executive Council, according to which the Department of Municipalities and Transport has exempted individuals and companies from 34 of real estate registration fees until end of this year 2020, all contributed to providing sufficient flexibility and helping the real estate market in Abu Dhabi to respond to the current circumstances and continue its growth and maintain the momentum of its transactions.”

H.E. added ” The capabilities of the real estate market in Abu Dhabi enable it to overcome these circumstances during the coming period. It also has all the aspects that enable it to benefit much more than other markets with the start of the global economic recovery. We hope that during the next few months, the real estate market will witness an increase in the transactions based on the supportive decisions taken by the Department in this field”.

The Department of Municipalities and Transportation exemptions include 2% of sale contract, 2% fees of sale on the plan, in addition to other fees such as land exchange fees, mortgage registration, mortgage transfer, mortgage amendment and mortgage redemption.

The total real estate transactions in Abu Dhabi are increased by 22% in the first quarter of this year to reach AED19.2 billion, compared to about AED15.8 billion during the same period last year.