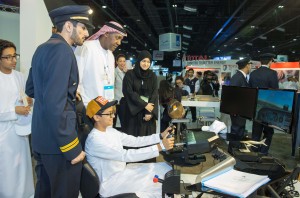 Think Science Fair, one of the biggest events of its kind in the region, has attracted a record number of visitors as hundreds of young entrepreneurs, innovators and scientists displayed their innovative project proposals in areas including electrical engineering, non-conventional energy, smart and safety systems and sustainable energy.

Organised by Emirates Foundation, an independent philanthropic organisation set up by the Abu Dhabi Government to facilitate public-private partnerships for empowering youth across the UAE, the event saw more than 10 thousand visitors convene at the Dubai World Trade Centre from May 5-7, 2015.

The judging committee for the Think Science Competition made up of more than 52 scientific experts and professors from universities and private corporate entities have been reviewing and evaluating the students’ projects to determine the winners at a ceremony, which is due to take place on May 25.

Think Science Fair was held under the patronage of H.H. Sheikh Abdullah bin Zayed Al Nahyan, Foreign Minister and Chairman of Emirates Foundation in partnership with the Ministry of Education and Abu Dhabi Education Council.

During the event, Mohammed Hassan Omran Al Shamsi, Chairman of the Higher Colleges of Technology and a board member of the Foundation recognised the judges for their efforts and lauded the students’ innovations. The fair was inaugurated by H.H. Sheikh Dhiab bin Mohamed bin Zayed Al Nahyan, Emirates Foundation board member.

He said, “I would like to express my gratitude to each and every member of the judging committee for lending their support and expertise to Think Science Fair. Over the past three days we have seen so many exciting innovative projects, which will undoubtedly make choosing a winner all the more difficult.

“The talented youth continue to innovate year after year and I look forward to seeing many of the projects displayed here becoming a reality in the near future.”

More than 200 projects representing the work of more than 550 Emirati youth were displayed at the fair, which aims to encourage UAE youth from public and private schools and universities to participate in an innovative national level science competition. The participating projects have entered the competition under the guidance of 160 mentors and supervisors from educational institutions across the UAE.