The Government of Saudi Arabia has signed seven agreements totaling US$ 111.5 million in assistance for Palestine refugees through the United Nations Relief and Works Agency (UNRWA). The signing ceremony, which took place in Amman, was attended by Saudi Fund for Development (SFD) Vice Chairman and Managing Director Yousef Ibrahim Al-Bassam and UNRWA Commissioner-General Pierre Krahenbuhl.

Al-Bassam commented: “The government of Saudi Arabia has long recognized the vital role played by UNRWA in bringing dignity to the refugees of Palestine. This is why the Kingdom stands at the forefront of the international community by providing support to the Agency so it can continue to respond to the needs of Palestine refugees.” 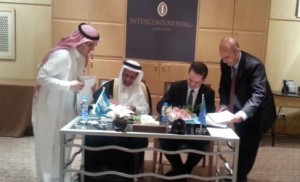 Mr. Krahenbuhl said: “The fact that the total sum of these agreements represents one of the largest ever signed with one of the Agency’s principal donors speaks volumes to the increasing suffering of Palestine refugees across the region, as blockade, illegal occupation and civil war continue to take their toll. It also speaks to the generosity of the Kingdom of Saudi Arabia and its people, who remain resolute in their support for Palestine refugees. On behalf of the Agency and the people we work for, the Palestine refugees, I extend my heartfelt thanks to the Kingdom.”

The contributions cover all five fields of UNRWA operations, with US$ 10 million for Palestine refugees affected by the conflict in Syria, whether they are in Syria itself or in neighboring Jordan and Lebanon; US$ 15 million for the continued reconstruction of the Nahr el-Bared camp in Lebanon; US$ 74 million for Palestine refugees in Gaza to repair their homes damaged during last summer’s conflict, and in support of health and education programmes in Gaza; and US$ 12.5 million for rehabilitation and reconstruction of schools and shelters in the West Bank. This latest agreement brings total contributions from Saudi Arabia through SFD to nearly half a billion dollars since 1994, with Saudi Arabia now the Agency’s third-largest donor for the second year running.