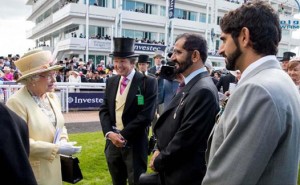 They exchanged talks on the strong UAE/UK relations. They also shared views about participant horses in the festival that had come from across the world.

Sheikh Mohammed also emphasised the UAE’s keenness on participating in the internationally renowned UK horse races and equestrian sports which attract knights and teams from across the globe as well as contribute to exchange of expertise and views regarding a promising and better future for horse races.

During their meeting, Queen Elizabeth praised Sheikh Mohammed’s role in supporting British equestrian sports through strong participation in meetings related to races in the UK and around the world, especially the English Derby. Earlier, the Vice President and Sheikh Hamdan made an appearance at the Epsom Derby in England this weekend.

Storm the Stars Horse, owned by Sheikh Juma Bin Dalmook Al Maktoum, has clinched the third position in the race. In the second half time, Buratino Horse of Sheikh Hamdan bin Mohammed Al Maktoum won the first position. At the end of the race, Sheikh Hamad bin Dalmook received the award on behalf of the owner of the horse.

Among those who attended the race were Princess Haya bint Al Hussein, wife of Sheikh Mohammed bin Rashid; Mohammed Ibrahim Al Shaibani, Director-General of His Highness the Ruler’s Court, Government of Dubai; Khalifa Saeed Suleiman, Director-General of the Department of Protocol and Hospitality in Dubai; a number of Sheikhs and officials.

Prepare your accounting practice for tomorrow’s challenges and opportunities