Qataris to Occupy 90% of Public Sector Jobs in 10 Years 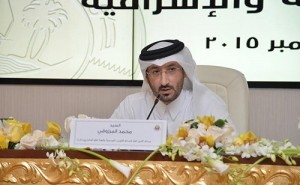 The Ministry of Administrative Development launched Saturday a meeting between Employees in supervisory roles participating in a programme for skillset development.
HE Minister of Administrative development Dr. Issa Saad Al-Jafali Al-Nuaimi said that such meetings were important as it opens the door for discussions between head of authorities and ministers.
HE the Minister spoke about the cooperation between the ministry and other state authorities in achieving the required progress in the performance of administrative government work. Such cooperation will ultimately enable Qatari citizens from occupying up to 90% of the public sector jobs over the next 10 years, HE the Minister added.
HE the Minister then moved to discuss plans to rationalize public spending in light of the new budget and ways to avoid going above the limits set by the government.