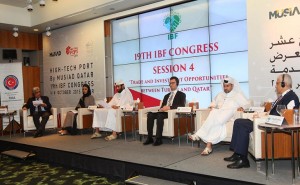 HE Qatari Businessmen Association(QBA), Board Member, Sheikh Mohamed bin Faisal Al -Thani said that the association has touched a strong desire of the Turkish businessmen to hold more trade deals with Qatari counterparts, which will make the association to effectively activate its role for the exchange of visits and experiences with the Turkish side.
During a session held here today on the sidelines of the 19th International Business Forum (IBF) Congress and dvanced and strategic technology exhibition at Qatar National Convention Center, HE Sheikh Mohamed expressed satisfaction of the association over development of Qatari-Turkish accelerated growth and prosperity , citing that the strong presence of so many companies in the conference translates decisions and recommendations called by the leaderships of the two countries.
During a session titled ” Investment and business opportunities between Qatar and Turkey” He stressed Qatar ‘s determination to proceed with its major projects and their implementation on its date in a preparation for the 2022 World Cup, despite a decline in oil prices to its lowest levels and great volatility in exchange rates.
He pointed out that Qatar had invited the private sector to participate in implementation of such large , diverse and revitalization projects, which constitutes a cornerstone to build a creative economy capable of shape by the year 2030 to make Qatar a developed country within the major economies.
Qatar could represent a trade portal with Turkey in the Gulf , he added, in this context, praising a stone foundation laid by HH the Emir Sheikh Tamim bin Hamad Al -Thani, and Turkish President Recep Tayyip Erdogan to establish a Turkish market in Doha, its construction oversees by Turkish and Qatari companies, which will increase the volume of trade exchange between the two countries.
For his part, Yousuf Mohammed Al-Jaida CEO of Qatar Financial Centre (QFC) Authority confirmed that Qatar enjoys an economy constitutes as one of the fastest growing economies in the world, saying we are working to create a distinctive and attractive environment for investment and work and we have economic facilities, encouraging Turkish companies to come and invest in Qatar.
Al-Jaida note that the Qatari economy is entering a new phase based on economic diversification, stressing that Qatar has not greatly affected by the decline in oil prices around world ,while pointing out the Qatari government is working to reconcile the situation and achieve financial balance consciously regardless of global oil prices.
Meanwhile, Mariam Al Khalaf of Qatar’s of International Cooperation and Trade Agreements Department at Ministry of Economy and Commerce explained that Qatar’s economy offers a range of benefits and incentives for foreign investment such as tax exemption and ownership of some projects which increase up to 100 percent, saying this directly strengthening Qatari-Turkish relations, which witnessed a great development during the last period in all sectors.
She referred to the big economic capabilities enjoyed by Qatar at regional and global levels, where it tops list of countries in international business competitiveness thanks to the attractive economic policy , free trade policy and facilities being provided to local and foreign investors.
Head of Export Department at Turkish Ministry of Economy and Commerce lauded distinguished relations between his country and the State of Qatar, which he said contributed a great role to promoting trade and investment relations, expressing his hope for achieving more cooperation in the future so as to ensure the achievement of economic well-being of the two countries.
He explained that his country is characterized by good investment climate so that it could attract direct investment, adding that Turkey has plans, principles and legislations to facilitate the reception of foreign investors and give them facilities with a view to developing the Turkish economy.