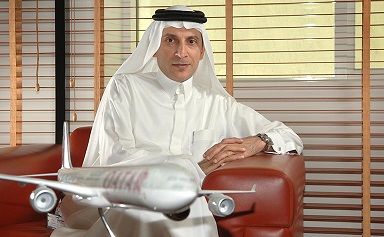 Qatar Airways Group Chief Executive, Akbar Al Baker, has been re-elected onto the Board of Governors of the global aviation industry body, the International Air Transport Association (IATA).

The appointment, for a term of three more years until the conclusion of IATA’s 74th AGM in 2018, took place at this month’s 71st IATA AGM in Miami, with Al Baker also re-appointed by his fellow airline executives to serve another one-year term on the Chair Committee of IATA, said Qatar Airways in a press release today.

The recent IATA AGM in Miami followed on from the 70th AGM in 2014 which was hosted by Qatar Airways and took place in Doha. At this time more than 1000 visiting guests and dignitaries were hosted by the airline.

Speaking on the occasion, Akbar Al Baker, said: “I am delighted to have been re-appointed to these prestigious roles, both as a Governor and as a member of IATA’s Chair Committee, which will allow me the opportunity to represent and to continue serving the interests of the airline industry as a whole, as well as ensuring fair and equal representation of airlines from the Middle East.” IATA’s Board of Governors acts on behalf of and in the interests of IATA, making decisions in the best interest of the entire IATA membership. The Board additionally provides policy directives and guidance to IATA Industry Committees and subsidiary bodies.

The IATA Chair Committee is accountable to the Board of Governors with respect to the duties and authority delegated to it by the Board. It is responsible for overseeing financial performance and governance of the association. IATA is the global body that represents, leads and serves 240 airline members, comprising 84% of scheduled international air traffic.

Qatar Airways, the national carrier of the State of Qatar, is one of the fastest growing airlines operating one of the youngest fleets in the world. Now in its 18th year of operations, Qatar Airways has a modern fleet of 160 aircraft flying to 147 key business and leisure destinations across six continents. Qatar Airways is a member of the oneworld global alliance.

The award-winning alliance was named the World’s Best Airline Alliance 2014 by Skytrax for the second year running. Qatar Airways was the first Gulf carrier to join global airline alliance, oneworld, enabling its passengers to benefit from more than 1,000 airports in more than 150 countries, with 14,250 daily departures. (QNA)