President Barack Obama called the apparent gassing of hundreds of Syrian civilians a “big event of grave concern” but stressed on Friday that he would not rush to embroil Americans in a costly new war. 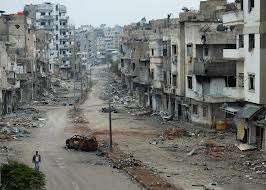 As opponents of Syrian President Bashar al-Assad braved the frontlines around Damascus to try and deliver tissue samples to U.N. inspectors from victims of Wednesday’s poisoning, Obama brushed over an interviewer’s reminder that he once called the use of chemical weapons a “red line” for U.S. action on Syria.

He played down the chances of Assad cooperating with a U.N. team that might, if given access soon, provide conclusive evidence of what happened. In any case, he would not react in haste to calls for U.S. intervention that would “mire” Americans in an undertaking that was counter to their long-term interests.

“Sometimes what we’ve seen is that folks will call for immediate action, jumping into stuff that does not turn out well, gets us mired in very difficult situations, can result in us being drawn into very expensive, difficult, costly interventions that actually breed more resentment in the region.

“The United States continues to be the one country that people expect can do more than just simply protect their borders. But that does not mean that we have to get involved with everything immediately.

“We have to think through strategically what’s going to be in our long-term national interests.”

Asked about his comment – a year to the day before the poison fumes hit sleeping residents of rebel-held Damascus suburbs – that chemical weapons would be a red line for the United States, he replied: “If the U.S. goes in and attacks another country without a U.N. mandate and without clear evidence that can be presented, then there are questions in terms of whether international law supports it.”

Russia and China have vetoed United Nations Security Council moves against Assad in the past and oppose military action.

International powers, including Moscow, have urged Assad to cooperate with a U.N. inspection team which arrived on Sunday to pursue earlier allegations of chemical weapons attacks and to give them access to affected areas before evidence deteriorates.

However, there was no public response from the Syrian government, whose forces have been pounding the region for days, making any mission by the international experts perilous – as well as potentially destroying evidence. Syria denies being responsible and has in the past accused rebels of using gas.

U.N. Secretary General Ban Ki-moon, who is despatching a top official to lobby Assad, said: “I can think of no good reason why any party, either government or opposition forces – would decline this opportunity to get to the truth of the matter.”

Opposition activists said they had been in contact with the specialist U.N. team in Damascus and had sent tissue samples with couriers seeking to slip across from the Ghouta region into the government-held center to deliver them to the inspectors.

Speaking from the town of Arbin, one of those affected by mysterious deaths from poisoning, opposition activist Abu Nidal told Reuters: “The U.N. team spoke with us and since then we prepared for them samples of hair, skin and blood and smuggled them back into Damascus with trusted couriers.”

Activist Abu Mohammed, in Harasta, said: “We’re being shelled and on top of that Ghouta is surrounded by regime checkpoints. But even that isn’t a problem – we can smuggle them out. The problem is the location of the U.N. committee in the hotel. They’re under heavy guard and government minders.”

The rebels’ efforts could prove futile; only material that has a clear provenance and a “chain of custody” would generally be treated as evidence by U.N. inspectors.

The longer the team waits for permission to investigate, the less likely they are to get to the bottom of an incident in which opponents say Syrian government forces fired rockets laden with poison gas canisters into rebel-held neighborhoods.

A U.S. official familiar with initial intelligence assessments said on Thursday that the gassing appeared to be the work of the Assad government.

Images, including some by freelance photographers supplied to Reuters, showed scores of bodies laid out on floors with no visible signs of injury. Some had foam at the nose and mouth.

French Foreign Minister Laurent Fabius said on Thursday that world powers must respond with force if allegations that Syria’s government was responsible for the deadliest chemical attack on civilians in a quarter-century prove true. Fabius stressed, however, there was no question of sending in troops.

Syrian officials say allegations against their forces are “illogical and fabricated”. They point to the timing of the attack, just days after U.N. inspectors arrived, and say it conflicts with previous assurances that, if they possessed chemical weapons, they would never use them against Syrians.

Former weapons investigators say every hour matters in determining if chemicals were used and who was behind them.

“The longer it takes, the easier it is for anybody who has used it to try to cover up,” said Demetrius Perricos, who headed the U.N. team of weapons inspectors in Iraq in the 2000s.

European officials speaking on condition of anonymity said that hypothetically, options for response range from air strikes, creating a no-fly zone, or providing heavy weapons to some rebels were all still on the table. But there was little prospect of concrete measures without U.S. backing.

“The American reaction … was cautious,” said one official. “And without U.S. firepower, there’s little we can do.”

Obama has directed U.S. intelligence agencies to urgently help establish what caused the deaths, a State Department spokeswoman said, but she said it may be difficult, given that the United States does not have diplomatic relations with Syria.

No deadline was given to agencies investigating the attack.

“At this time, right now, we are unable to conclusively determine CW (chemical weapons) use,” the State Department’s Jen Psaki told reporters. “We are doing everything possible in our power to nail down the facts,” she added.

The State Department also said senior U.S. and Russian diplomats would meet in The Hague next Wednesday to discuss ending Syria’s two-year civil war, which has already killed more than 100,0000 people. It would be the first such meeting since allegations of the chemical attack.

A senior State Department official said chemical weapons would also be discussed at the meeting.

Assad’s Alawite sect is an offshoot of Shi’ite Islam and has the backing of Shi’ite powers Iran and Lebanese Shi’ite militant group Hezbollah. Western powers back the opposition but have been reluctant to fully commit to an Arab Sunni-backed revolt increasingly overtaken by Islamists linked to al Qaeda.

Millions have been forced from their homes. On Friday, the United Nations said 1 million children alone have fled the country and 2 million have been displaced inside Syria.