The Suez Canal Authority (SCA) has begun the countdown to the opening of the New Suez Canal, billed as the ‘symbol of the new Egypt’ on 6 August 2015 by Egyptian President Abdel Fattah El-Sisi. 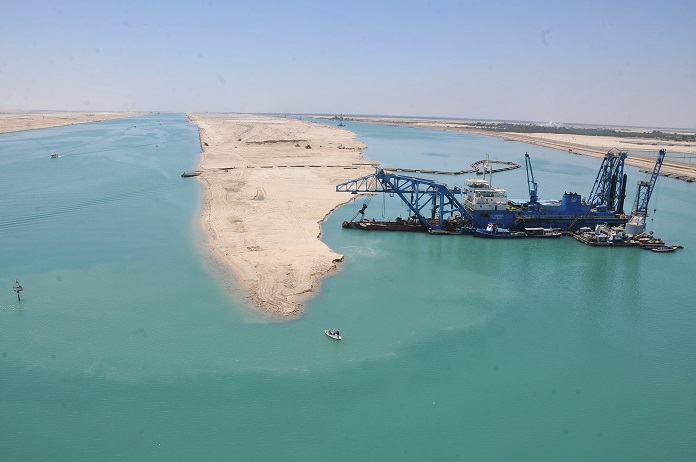 “The New Suez Canal is more than just a new waterway and an astonishing feat of engineering. It is a catalyst for the Egyptian people which will unleash a renewed sense of pride and a more prosperous future,” asserted Admiral Mohab Mameesh, Chairman and Managing Director of the Suez Canal Authority.

“The project is more than 80% complete and climbing, with more than 210 million tons of sand excavated,” noted Adm. Mameesh. The new, 72-kilometre canal, an engineering marvel was constructed in just 12 months. When fully completed it will involve 35 km of dry digging, and 37 km of ‘expansion and deep digging’, whereas the whole canal is 164 km long. The new works will increase trade alongside the canal and its implications will reverberate not only in Egypt but also in the region and across the world.

The enlarged canal will allow ships to sail in both directions at the same time over much of the canal’s length. This is expected to decrease waiting hours from 11 to 3 hours for most ships and to double the capacity of the Suez Canal from 49 to 97 ships a day.

The official inauguration will take place at an extravagant gala event to be held on the banks of the New Suez Canal on 6 August. On this historic day, Egyptian President Abdel Fattah El-Sisi will be joined by world leaders to witness the first time traffic has flowed simultaneously north and south through the Red Sea – Mediterranean crossing.