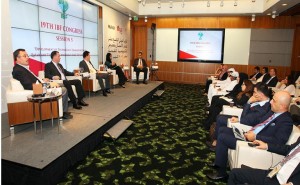 The 19th International Business Forum (IBF) and High Tech Port Fair concluded on Thursday at Qatar National Convention Center under the organization of Turkey’s Independent Industrialists’ and Businessmen’s Association (MUSIAD) in cooperation with the Permanent Committee for Organizing Conferences.
IBF President Erol Yarar expressed delight at the success of the 19th edition of the forum that is staged in Doha, Qatar for the first time, noting that constructive session were held during the event, enabling participants to learn about the technology that each of Turkey and Qatar has, and projects that both sides can benefit from.
He hoped that the forum and fair will be a starting point for joint events between Qatar and Turkey in the future so as to promote commercial and investment cooperation between the two countries.
Five sessions took place during the event, focusing on ICT sector in Qatar, technical partnership in civil aviation between Qatar and Turkey, cooperation in cyber security and homeland security between the two countries, strategic partnership to boost bilateral trade and investment opportunities, and technology transfer between the two countries.
Participants lauded the event and praised the large amount of knowledge they were able to attain in addition to learning about several state-of-the-art Turkish technological products not only in the defense industry but in other fields too.
The 19th IBF and High Tech Port Fair aimed to develop the deep ties between Qatar and Turkey and came as enactment of economic and commercial cooperation and creating a platform that incorporates the public and private sectors in both countries. It also endeavored to build communication bridges between businessmen in both countries in order to discuss prospective investment and commercial opportunities and evaluate potential cooperation in high-tech defense and protection industries.