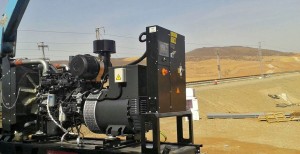 The high-speed rail corridor will serve 166,000 passengers daily and will travel 444 km in less than three hours. The project which will be completed in late 2016, will connect the most important rail corridor in the Gulf region. The railway line will permit speeds of up to 320 km/h and will offer a high degree of comfort to travellers.

The Cobra Group, a leading company in terms of the creation of industrial infrastructure that has an international presence, has put its trust in the quality of HIMOINSA generator sets on numerous occasions, choosing them as a safe bet to power many of its industrial and international construction projects.

In this case, HIMOINSA has installed 29 generator sets on several sections of the railway line, using models HFW 155 T6, HFW 200 T6, HFW 250 T6 and HFW 290 T6. These are generators with Iveco engines that operate in standby power to cover any network failure and to ensure continuity in the functioning of all the services of the stations and stopping points on the rail route.

In late 2014, several technical professionals from Cobra Group attended quality tests conducted in HIMOINSA factories in Spain and verified that the equipment met the demands requested by both Cobra engineers as well as the technical team from the Saudi Arabia Ministry of Transportation, the end user of this equipment.

“There were two main reasons why we chose HIMOINSA generator sets. On the one hand it is the success we have experienced partnering with HIMOINSA on many other projects; and on the other hand HIMOINSA can guarantee a local service in Saudi Arabia through the company’s regional technical & sales team”, said a senior Cobra Group official. HIMOINSA’s subsidiary in the Middle East, located in Dubai which has a commercial technical team has served the entire region and offered personalized quality service.

In addition to responding to the mass movement of Muslim pilgrims who arrive here every year from different parts of the world, this project is considered of extreme importance due to the harsh climatic and geological conditions that require high quality equipment. A journey of over 444 kilometres with stretches of dunes, sand and strong winds which mean that the generator sets must be designed to withstand intense sandstorms and very high temperatures.

HIMOINSA generator sets can endure temperatures of 50º and are designed to operate in dusty environments, factors that can damage the generator filters and therefore affect operation. As a result, this type of equipment for desert areas have been designed with tropicalized radiators that have double varnish and anti-condensation resistance. The alternator air filters are specially treated to prevent dust from entering and to ensure uninterrupted power supply.