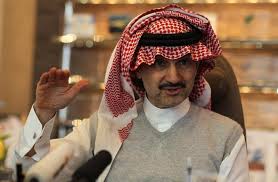 “It was a customary visit, there is interest in investing in Greece,” said a government official who declined to be named.

The prince, ranked 26th on the Forbes global ranking of billionaires, owns large stakes in Citigroup, and Apple Inc. among other companies.

A nephew of Saudi King Abdullah, bin Talal is also the owner or part-owner of luxury hotels including the Plaza in New York, the Savoy in London and the George V in Paris.

Past speculation that funds would flow in from wealthy Middle East and Asian investors have so far failed to materialize, apart from Qatar Holdings’ investment in a gold mining project and Chinese port operator Cosco’s investment in Piraeus Port.

Athens is also looking for buyers for a strategic stake in fourth-largest lender Eurobank and real estate investors to develop the site of the old Athens airport Hellenikon.

Alwaleed’s investment vehicle, Kingdom Holding, is seeking out new targets to diversify its global portfolio and has asked investment banks to identify possible acquisition targets around the world.

In November last year Samaras visited the wealthy Gulf state of Qatar and met top officials from its sovereign wealth fund to discuss investment opportunities to help the struggling economy.