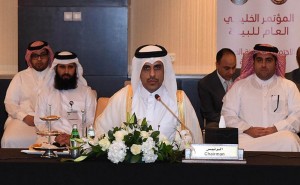 Ahmed Mohammed Al Sada, Assistant undersecretary of the Ministry of the Environment for Environmental Affairs

Doha will host on Monday the 36th meeting of the GCC undersecretaries responsible for environmental affairs to discuss a number of environmental issues of concern to the GCC countries.
The two-day meeting is part of the activities organized on the occasion the Gulf environment conference which is being hosted by the State of Qatar, represented by the Ministry of Environment, since 17 October. The conference will be concluded on 28 October with the 19th meeting of the GCC environment ministers.
In a related development, Doha hosted today the 15th meeting of the GCC standing committee on wildlife headed by Eng Ahmed Mohammed Al Sada, Assistant undersecretary of the Ministry of the Environment for Environmental Affairs.
In his speech during the meeting, Al Sada said that the GCC countries are making strenuous efforts to preserve the diversity of animals, plants and wildlife in the wild and marine environment as well as the natural habitat.