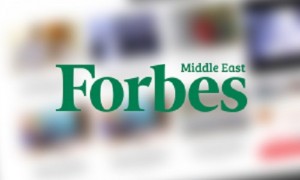 His Highness Sheikh Khalifa bin Zayed Al Nahyan, President of the United Arab Emirates, announced earlier this year that 2015 was to be the Year of Innovation. Inspired by this, Forbes Middle East has for the first time unveiled new rankings focused specifically on Emiratis and UAE-based enterprises that are pushing the boundaries of the business world in the Middle East.

Mohammed Al Hammadi, Executive Director of Publishing and Editor-in-Chief of Al Ittihad, delivered the keynote speech, praising the gathered trailblazers for using their vision and talent to revolutionize their industries, bringing with them modernization and growth, and making the United Arab Emirates one of the most diverse, inclusive and innovative countries in the world. Mr Al Hammadi was recognized himself for his continued support of entrepreneurs in the region. Among many other accolades, Mr Al Hammadi is a founding member of the ‘Young Arab Leaders’ organization.

Abdul Baset Al Janahi, CEO of Dubai SME, the agency of the Department of Economic Development (DED) in Dubai mandated to develop the SME sector, was also in attendance to hand out the awards with Mr Al Hammadi and recognize the achievements of the gathered leaders. Mr Al Janahi has been contributing significantly to developing and maintaining an entrepreneurial ecosystem in Dubai and mobilizing government and private sector support to help young and aspiring entrepreneurs in the United Arab Emirates.

Mr Al Janahi said: “Dubai SME is proud to be part of the initiative from Forbes Middle Ease to recognize entrepreneurial excellence as it complements our efforts to nurture the UAE’s entrepreneurial culture into a strategic enabler of economic development, as envisioned by His Highness Sheikh Mohammed Bin Rashid Al Maktoum, UAE Vice President and Prime Minister and Ruler of Dubai. Dubai SME has supported more than 17,500 entrepreneurs and facilitated the launch of over 2,800 SMEs since its inception in 2002, helping aspiring Emiratis realize their dreams and cementing Dubai’s reputation as a hub to launch and grow innovative and smart business concepts.”

Forbes Middle East was supported by several organizations in hosting the event, including: Dubai Islamic Bank; Rasasi Perfumes; Al Tayyar Travel Group; Al Ittihad; Elegant Resorts; Elite Executive Services Company (EES); Al Oula Radio 107.4; and Dubai One. The event was attended by some of the most inspirational and successful leaders in the UAE.

Mrs. Khuloud Al Omian, Editor-in-Chief, Forbes Middle East, said: “We at Forbes are incredibly proud of our tradition of honoring the most successful business leaders, paying tribute to the people that have reached the top of their game, reinvented the rules and brought about innovation in their industries. We want to shine a light on the local startups and entrepreneurs that are shaking things up and inspiring growth and diversification. Every single one of the people on our lists has proven that they have the guts, the determination and the passion to excel at what they do, and by carrying out their business in the United Arab Emirates they are bringing excellence to the whole region.”