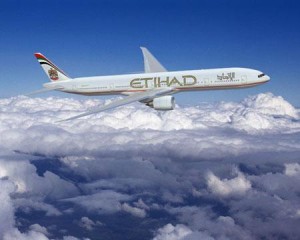 In a keynote speech, President and Chief Executive Officer of Etihad Airways, James Hogan, highlighted the importance to tourism and trade of the airline’s new route between Abu Dhabi and Perth.

The lunch was attended by a business delegation from Western Australia, comprising senior representatives from the oil and gas industry, visiting Abu Dhabi to explore business and trade opportunities.

Hogan said Etihad Airways’ daily, non-stop flights between Abu Dhabi and Perth from 15 July, would meet the strong demand for travel between the UAE and Western Australia.

“We are confident our new services will boost travel and trade between the UAE and Western Australia, and strengthen our presence in Australia, where we already serve Sydney, Melbourne and Brisbane with great success.” Etihad Airways’ commitment to trade and tourism between Australia and the UAE will see its flights between the two countries rise from 28 to 35 per week. The new flights to Perth will deliver an extra 3,668 seats between Abu Dhabi and Etihad Airways’ global flight network and Australia.

Australia’s Ambassador to the UAE, Pablo Kang, said: “Trade between the UAE and Australia is important and growing. Trade increased by 25 per cent in 2013 to AUD$6.4 billion, making the UAE Australia’s 13th largest export market and 15th largest trading partner worldwide.” Commissioner Western Australian Trade Office – Middle East Africa, Pankaj Savara, said: “The new service will bring more visitors and tourists to the State and help develop Perth as a major international air tourism and transport hub. It will also help open new markets, enhance Western Australia’s economy and encourage students from the Middle East to study at Perth universities and education institutions.” Etihad Airways will operate an Airbus A330-200 aircraft with 262 seats – 22 seats in Pearl Business Class and 240 in Coral Economy Class on the route.