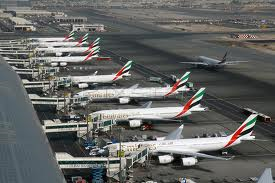 Annual passenger traffic of 66,431,533, up 15.2 per cent compared to 57,684,550 recorded during 2012, represents the airport’s highest total ever thanks to network expansion and monthly passenger numbers which exceeded 5 million for 12 consecutive months. According to the annual traffic report issued by operator Dubai Airports today, passenger numbers in December reached 6,047,126, an increase of 13.6 per cent compared to 5,320,961 recorded during the same month in 2012.

Dubai International continues to benefit from the efficiencies offered by the large number of wide-body jets that operate into it with the average number of passengers per aircraft movement rising to 198 in 2013, up 4.5 percent from the 189 recorded in 2012. Aircraft movements in 2013 reached 369,953, up 7.5 per cent compared to 344,245 movements recorded during 2012. Aircraft movements in December totalled 32,832, compared to 30,945 movements during the same month in 2012, an increase of 6.1 per cent. During the year a total of 28 new passenger destinations were added thanks largely to the expanding networks of Dubai-based airlines flydubai and Emirates bringing the total passenger destinations served by Dubai International to 239.

Paul Griffiths, CEO of Dubai Airports said, “It was truly a historic year for Dubai’s aviation sector highlighted by the successful opening of Concourse A, the world’s largest and only facility purpose built for the Airbus A380; the launch of passenger services at Al Maktoum International at Dubai World Central; and a record breaking airshow that featured aircraft orders exceeding US$ 200 billion – the bulk of which was placed by Dubai’s flag carriers. 2014 is set to be another eventful year, one featuring continued traffic growth, network expansion and the ongoing enlargement and upgrade of our facilities and runways.”