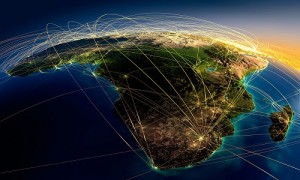 The Dubai Chamber of Commerce and Industry on Wednesday published a report into growth trends outside the natural resources and commodities sector in sub-Saharan Africa.

The report, entitled, “Beyond Commodities: Gulf Investors and the new Africa”, was compiled by the Economist Intelligence Unit. According to a report from the Mozambique News Agency, AIM, it finds that Africa is resilient to the global recession, with East Africa being the most appealing region for non-commodity investment from the Gulf.

The report highlights opportunities in the development of shopping centres and hypermarkets, travel and tourism, and logistics. It points out that Gulf brands are among the front-runners in newer markets such as Mozambique.

A key facilitator of the tourism industry is air travel. The report points out that Gulf based airlines have been entering into partnerships with African airlines to improve services. Thus, Emirates Airlines has taken over the management of the Angolan airline, TAAG, and Etihad Airways has purchased a forty per cent share in Air Seychelles. Qatar Airways flies from Maputo to its Doha hub where many passengers transfer onto flights to locations worldwide.

The report laments that Africa’s poor infrastructure and complicated multi-country bureaucracy has made logistics expensive for companies in every sector, but it sees opportunities for investors, particularly in Mozambique and Tanzania, while these two countries develop their gas industries.

The report states that retail presents a huge opportunity as the African continent’s population grows and becomes increasingly urban, although historically, a lack of suitable retail space has been a major barrier.

However, the report points out that a dozen new shopping centres were opened in Africa last year with a similar number expected by 2017. Among these is the “Mall de Mocambique”, located in the southern city of Matola, which will be one of the largest on the continent, at 67,000 square metres, when it opens.

The Dubai Chamber of Commerce and Industry has over 150,000 members. According to Mozambique’s Investment Promotion Centre, CPI, last year the United Arab Emirates was the largest source of foreign investment in Mozambique. However, much of that US$891 million of investment came from international companies which use Dubai as a financial centre. For example, the Brazilian company Vale used Dubai for the financing of its project to build the railway from the Moatize coal basin, in the western Mozambican province of Tete, to the mineral port at Nacala-a-Velha.

Dubai is looking to expand business links with Mozambique. According to the chairman of the Dubai Chamber of Commerce and Industry, Majid Saif Al Ghurair, the Chamber plans to open an office in Maputo early next year.