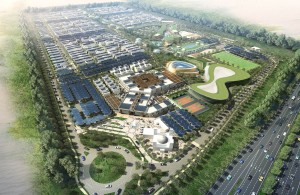 Diamond Developers the real estate organization behind The Sustainable City – Dubai’s first world-class sustainable community project – is extending its relationship with the University California Davis (UC Davis), United States, in a collaborative venture that will fund academic and applied research on sustainable development.

To cement the new expansion to their relationship, which was first established with an MoU in February 2014 , a senior delegation from Diamond Developers visited UC Davis May 12 – 14. A main item on the agenda was how the UC Davis could benefit from The Sustainable City’s Innovation Centre, a research institution that is being established to promote best practices in sustainability –  – and how the Sustainable City could benefit from UC Davis’ world-class research and scholarship.

“This was an important visit that enabled us to discuss how Diamond Developers is going to work in cooperation with UC Davis to fund further research into sustainable development. In particular, It gave us the opportunity to showcase the facilities of The Sustainable City’s Innovation Centre, which will set new standards for research and education relating to the conservation of resources and the environment. We were delighted to be able to use the opportunity to plan such initiatives as possible future visits for UC Davis’ students to the Innovation Centre, the sharing of knowledge and the comparing of best practice,” said Faris Saeed, Diamond Developers CEO and co-Founder.

The collaboration between Diamond Developers and UC Davis extends further, including the development of a professional training program in sustainability with an online curriculum; and the development of sustainability performance indicators which will be relevant to arid climates, such as the UAE and California and other areas of research cooperation.  “The collaboration between UC Davis and Diamond Developers, especially around the twin Innovation Centers, promises to pioneer path-breaking research and train a new generation of scholars who will lead the UAE and the region towards the future of sustainable cities,” Distinguished Professor Suad Joseph observed.