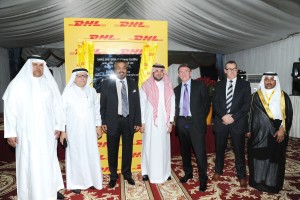 It is the second of three new facilities that DHL Express has in plan for the Kingdom and that would total an investment size of over US $95 million. According to a recent report, Saudi Arabia is ranked second in logistics in the Agility Index just behind China with the UAE, Oman and Qatar being ranked for their ‘market compatibility’.  This investment will help support DHL’s continued growth in Saudi Arabia and the wider region resulting in even better transit times and network reliability.

Nour Suliman, CEO, Middle East and North Africa, DHL Express, commented: “The Middle East and North Africa and its trading links are growing in importance in the global logistics industry with strong growth projections for the next few years. Our plan is to be right at the center of that growth to serve our customers. Saudi Arabia is one of the region’s biggest markets for DHL Express. Our capability in Saudi Arabia is a key revenue and service driver for the region.”

DHL Express’ new Riyadh facility will introduce a new network flight in addition to the continued use of commercial flights that will bring in 7,500 shipments daily. These will now be promptly cleared as the facility will have its own on-ground customs clearance that is Transport Asset Protection Association (TAPA)–certified.

Geoff Walsh, Country Manager, DHL Express Saudi Arabia, remarked: “The new facility will reduce the transit times by a day or two and will allow us to increase our flight capacity and schedules by 400 per cent thereby boosting customer satisfaction.”

DHL has been a pioneer in the Middle East logistics industry for more than 30 years and currently has 261 service centers and service points across 19 countries in the region and employs 5,000 employees across the Middle East of which nearly 1,000 are in Saudi Arabia. Through its innovation, service excellence and commitment, DHL continues to offer customers superior logistics solutions.