DAFZA wins ‘IMA ME Finance Team of the Year 2015’ Award 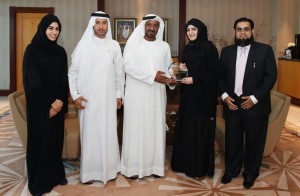 The Dubai Airport Free Zone Authority (DAFZA) has recently announced that its Finance Team was named ‘IMA Middle East Finance Team of the Year 2015’ by the Institute of Management Accountants, the global association of accountants and financial professionals in business. The award was given by IMA, in recognition of the outstanding contributions of DAFZA’s finance team to the overall success of the Freezone, during a special ceremony held as part of IMA’s 3rd Middle East Conference, which took place at the Address Hotel, Dubai Marina.

His Highness Sheikh Ahmed Bin Saeed Al Maktoum, Chairman of the Dubai Airport Free Zone, praised the strong performance of the finance team in the process of strengthening the institutional excellence and advancing leadership of DAFZA as one of the most developed free zones in the world. He also lauded the successful achievements that the team has received, which can be attributed to their skills and abilities to embody the ambitious aspirations to be part of DAFZA’s move to become the best leading free zone in the world and driving the growth of the national economy as well—falling in line with the vision of His Highness Sheikh Mohammed Bin Rashid Al Maktoum, UAE Vice President and Prime Minister and Ruler of Dubai.

DAFZA has also been recognized as IMA’s ‘Gold-Certified Corporate Partner. The recognition is awarded to those organizations that have demonstrated a strong level of commitment to continually support their staff by empowering talent with the Certified Management Accountant (CMA) program.