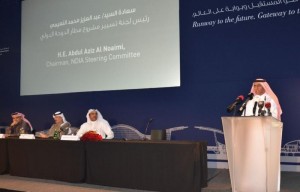 The Hamad International Airport (HIA) will serve the 21st Century traveler and its world-class facilities will leave a memorable experience, a senior official said here Wednesday after the touchdown of the flight.
The maiden flight landed on HIA’s East runway today. The flight carried on-board members of the Steering Committee of New Doha International Airport (NDIA) and other delegates. Qatar Civil Aviation Authority Fire Fighting Services greeted them with Water Salute.
Speaking at a media conference to mark the soft launch of the new airport, HIA Steering Committee Chairman Abdulaziz Al Nuaimi said, “The HIA is a world-class hub built to cater to rapidly evolving aviation and passenger needs in the 21st Century.” The new airport’s capacity will be 30 million passengers annually, more than the initial plan. “The capacity was increased to accommodate increased passenger traffic over the last decade,” he said.
Ten carriers will shift operations from Doha International Airport to the new airport initially. The remaining carriers will move by May 27, he said. The HIA and Airport City, which together comprise the New Doha International Airport (NDIA) project, occupy over 29 square kilometres. Sixty per cent of its land is reclaimed Arabian Sea.
The project includes 100 buildings marked for specific use. The Passenger Terminal, spread over 600,000 square metres, has three concourses and 33 contact gates. Later, this will increase to five concourses and 65 contact gates, including eight for A380 aircraft, he said.

Once fully operational, the Terminal will feature 16 lounges, 26 art installations, more than 100 food and beverage retail outlets, a transit hotel, swimming pool, a luxury spa, squash courts and a four-storey catering facility – one of the largest in the world – and a public mosque with a capacity to accommodate 500 worshipers at prayer time. “The launch of the new airport is the fulfillment of the vision of HH the Father Emir Sheikh Hamad bin Khalifa Al-Thani, brought to fruition by HH the Emir Sheikh Tamim bin Hamad Al-Thani,” said Al Nuaimi.
The HIA will be a source of pride and joy to all people of Qatar for many decades to come, he said, adding, “Passengers travelling through its gates and the luxurious facilities’ state-of-the art technologies will have a memorable experience that would reflect Qatar’s status and importance on global travel and tourism map”. “Thanks to the efforts of the people of Qatar, we have kept our promise of relocating services to HIA in the second quarter of 2014. HIA will be operational and open doors to all airlines including Qatar Airways within 27 days, he concluded.