Cayan Group, one of the Middle East’s leading real estate developers, is making its foray into Europe, commencing with an alliance with Spanish real estate developer, Sarena. The elite partnership will witness the two companies jointly develop a project in stylish Costa del Sol which is situated in Marbella in Spain. 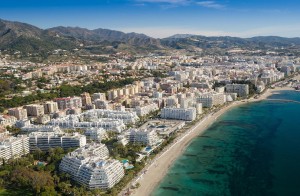 With this union, Cayan Group initiates its ambitious expansion plan into European markets which marks a major milestone for the Group. Embarking on a new strategy, Cayan Group aims to expand into newer markets, predominantly in the European belt, thus becoming a real estate leader internationally and strengthening its position the world over. The European real estate market is going through a lucrative phase with hardly any signs of easing up and it is Cayan Group’s strategic decision to penetrate the European market during this time and be part of this gainful period.

Cayan Group will develop this upcoming project in partnership with Sarena Group and will also handle the sales and marketing for the venture in the region. Commenting on the developments, Ahmed Alhatti, President and Chairman of Cayan Group, said:“Although our absolute priority is the development of strategic projects within the Kingdom which we will be announcing multiple projects soon, developing projects in Europe is a strategic decision that was made at the first place to serve our clients better and offer them a variety of options that will cater to their needs. Secondly, this decision comes as a proof of the ability of Cayan Group to stand out in the most competitive markets. Partnering with the notable Sarena Group has a special importance to us and we are positive that this project will achieve a huge success.”

Gabriel Massoud, the Founder of Sarena further added, “Cayan Group’s projects are exemplary and we are pleased to partner with a Group of such caliber and reputation. We look forward to this partnership which will open the door for Sarena to enter the Middle East region and specifically the Saudi market to develop unique projects in the future.”

Sarena was founded Marbella  in the early 80s. After developed a front line beach project in Marbella called Coral Beach, Sarena established La Mairena by acquiring 2.000.000 m2 of land in the pristine hills above Marbella. The land is known for its marvelous views sceneries  and charming nature, it continues to be used for picturesque developments and projects.