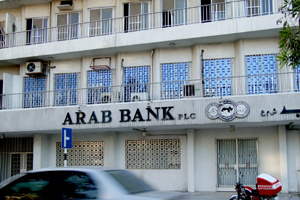 Arab Bank Group reported 5.4% growth in net profits after taxes and provisions for the first quarter of 2014, reaching USD 216.3 million compared to USD 205.1 million for the same period last year.

Commenting on these results, Arab Bank’s Chairman- Mr. Sabih Masri said that the Bank’s financial performance during the first quarter reflects the progress it continues to make in implementing its strategy of diversifying income streams and concentrating on operating revenues in all the countries in which it operates.

Arab Bank’s CEO- Mr. Nemeh Sabbagh commented that achieving this level of profits is an indication of the Bank’s capability to deal with local and regional developments successfully. He added: “It also shows that the Bank’s prudent credit policies continue to preserve the overall quality of our credit portfolio, resulting in lower provisions for non-performing loans compared to the same period last year.” Mr. Sabbagh emphasized that the Bank remains focused on its core operational activities raising its net interest and commissions by 4% and 8% respectively compared to the same period last year.

Mr. Sabbagh pointed out that the Bank continues to maintain a high level of liquidity with its loan to deposit ratio reaching 61.1% and its capital adequacy ratio standing at 14.6%.