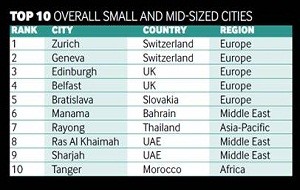 The property developer, which has been a major contributor to the growth of the emirate through a mix of residential, hospitality, and retail property developments, extended congratulations to HH Sheikh Saud Bin Saqr Al Qassimi, Ruler of Ras Al Khaimah and supreme council member, for the foresight that has thrust the region into the international spotlight.

“The Financial Times’ Global Cities of the Future 2014/15 Awards have been published and we are proud to see Ras Al Khaimah feature in the top cities list in five categories,” explained Benoy Kurien, General Manager at Al Hamra Real Estate Development.

That investment extends beyond financial gains according to Mr Ebrahimy, who points to benchmarks set by Financial Times in determining award criteria. Among the lifestyle considerations, for example, are various quality of life indices; life expectancy, the number of physicians per 1,000 people, and level of tertiary education among those aged between 25 and 64.