Airbus Group said on Wednesday its net profits climbed 15 percent last year and predicted deliveries of more than 650 aircraft in 2016 and a rise in orders to record levels. 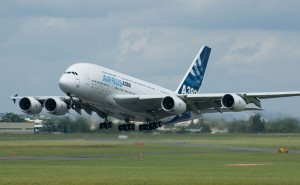 The France-based European aerospace group chalked up a net profit of 2.7 billion euros ($3.0 billion), with sales up 6.0 percent to 64 billion euros. Orders soared to 159 billion euros, sending its order book to a record of more than a trillion euros.

Earnings before interest and tax jumped to 4.1 billion euros from 4.07 billion a year earlier, said the group, which announced its results in London. Based on the strong results, the group proposed a dividend to shareholders of 1.30 euros per share, up 8.0 percent from the previous year. “We remain focused on programme execution and managing the challenges we face with the acceleration of the A350,” CEO Tom Enders. “The company broke even on production of the A380 superjumbo for the first time, and will restore output of the older A330 wide-body to seven planes seven planes a month.”