Pumped up: the year oil fell

Gasoline prices headed up, diesel prices headed down. What do the changes mean for local construction businesses? Stuart Matthews writes 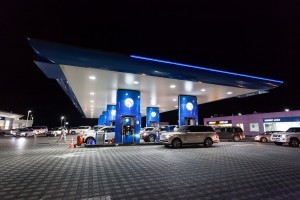 The announcement was unexpected, brief and the change came quickly. In a little over the space of a week the UAE went from having substantially subsidised fuel, to seeing its petrol and diesel prices determined by global market values and the newly-formed Fuel Price Committee.

For years the price of petrol and diesel in the UAE has been subsidised by the government. This has shielded buyers from global fluctuations in the cost of petrol and diesel, influenced by the price of oil. With these subsidies removed UAE consumers now pay rates based on average global prices. However, these new prices are still regulated by the government via the committee, which is tasked with monitoring the global prices of fuels and is expected to announce each month’s new prices on the 28th.

“The decision to deregulate fuel prices has been taken based on in-depth studies that fully demonstrate its long term economic, social and environmental impact,” said Suhail Al Mazroui, Minister of Energy, at the time of the announcement.

“The resolution is in line with the strategic vision of the UAE government in diversifying sources of income, strengthening the economy and increasing its competitiveness in addition to building a strong economy that is not dependent on government subsidies. This step will put the UAE on par with countries that follow sound economic methodologies. It is also anticipated to improve the UAE’s competitiveness while positioning the nation on international indices.”

The changes will introduce some potential price volatility to the market, though this is likely to be extensively cushioned by the monthly cycle of price announcements. While the driving public are facing increased costs at the pump, and probably in taxis in the future, the construction sector may gain a little, in more ways than one.

The most obvious gain is that when the changes came into force the price of diesel actually came down 29% to be AED2.05, while petrol on the other hand went up between 23-24%, depending on the octane rating.

“Considering the international prices of oil and petroleum derivatives, we expect diesel prices to go down. This will stimulate the economy as lower diesel price would mean lower operating costs for a wide number of vital sectors like industry, shipping and cargo among many others,” said Al Mazroui.

Everything from heavy machinery to diesel generators got a little bit cheaper to operate as a result. While fuel is only a small part of the full lifecycle cost of a construction site’s most expensive motorised kit, every little bit counts and savings in one area may help offset the costs accrued for the petrol-powered site vehicles used elsewhere.

While businesses in the UAE now pay the highest fuel prices among GCC countries – those in Saudi Arabia pay the least – by global standards fuel is still a low-cost commodity in the region. Internationally taxes are levied on fuel costs to cover anything from road improvements to environmental programmes and these taxes usually far exceed the core cost of the fuel; just ask anyone from Norway, which enjoys the world’s highest fuel prices despite substantial oil reserves of its own.

Observers though are certain there will be an upside. The International Monetary Fund has estimated that it could save the UAE $500m in just the rest of 2015, with these savings likely to increase in the years ahead. Removing costly subsidies also enhances the country’s economic competitiveness for investors and creditors, who might put money into businesses or extend loans to fund growth. The timing of the change could not have been better. Oil prices are at their lowest since 2009, offering consumers a buffer against sharp price increases, while reducing government expenditure at a time when oil revenues are slackening off.

“Given the current relatively low price of crude oil and related products, it would seem to be an opportune time to reform state subsidies of fuel without causing a sharp spike in inflation or the cost of living in the near term,” said KhatijaHaque, head of MENA Research at Emirates NBD.

“Ultimately, rationalising fuel subsidies and moving to a more flexible pricing system should encourage consumers to switch to more fuel efficient cars and increase the use of public transport. It should also encourage greater investment in public transport, renewable energy and energy efficiency.”

Subsidised fuel prices tend to encourage wasteful consumption and contribute to excessive emissions. It’s clear the changes in pricing are also intended to encourage what’s been called ‘rationalised’ consumption. This is particularly aimed at private consumers but the overall transport sector was responsible for 22% of the total greenhouse emissions in the UAE in 2013 amounting to 44.6 million tonnes of carbon dioxide. Reducing this output by exposing consumers and businesses to market prices fits with other broad government strategies aimed at making the UAE a ‘greener’ country, such as introducing solar power and developing green building regulations.

These are viewpoints advocated by AbhayBharghava, associate director, Energy & Environment Practice, Frost & Sullivan. He believes there are two key perspectives to consider.

“If any economy maintains subsidies it reduces income and that can lead to a tougher credit rating. So as we see it the removal of subsidies is good for the long term health of the economy.”

A healthy economy could see the construction sector receive a boost from increased spend on infrastructure projects and, in the long term, increased investment in public transport. Removing fuel subsidies could benefit the budget directly freeing up resources for spending elsewhere, such as on infrastructure. Research from the IMF has shown that the GCC spends 3.4% of GDP on fuel subsides, substantially higher than other regions. By comparison, what it classifies as advanced economies spend less than 0.1% of their GDP on fuel subsidies.

“The second perspective is that we are, as part of the overall Middle East region, very prone to wasteful consumption,” said Bharghava. “Per capita energy intensity is high and with an increase in fuel prices what hopefully will happen is that people and businesses will try to cut down on consumption where they can.

“In our opinion it’s a great move and in line with what the government is doing to go green. It started with solar was followed by energy efficiency measures for buildings and now the removal of fuel subsidies. It is clearly trying to attack the issues that have plagued the economy from a wasteful consumption point of view.”

While subsidies maybe under pressure Bharghava doesn’t believe electricity subsidies will be next in the sights, as the local economy continues trying to encourage automated manufacturing and other energy-intensive industries to expand. Transport costs, whether hidden or up front, are likely to remain fixed too. So while there is an immediate saving to be had for some companies, the cost of local road transport is only a tiny portion of the final price of imported materials.

The changes may also act as a catalyst for the greater development of alternative fuels. But the large-sale introduction of alternative fossil fuels, such as CNG or LPG, may be hampered by a lack of readily available infrastructure for filling and maintenance.

“And where would that fuel come from because we don’t have those processing facilities here in the country and that means asking for a new industry to develop,” said Bharghava.

The lower diesel prices may however encourage greater shift to the use of the fuel in transport vehicles. While diesel cars are almost unheard of in the region – thanks in part to low fuel quality as well as low petrol costs – fleets of smaller vans and buses running on petrol could well find themselves being replaced with diesel variants. This could prompt a stall in purchasing decisions for those running commercial fleets, while they take a wait-and-see view of how fuel costs in the UAE will stabilise after a few months of the new pricing regime.

One immediate challenge for this shift may be at the pump itself. Most gas stations have one or two diesel bowsers sitting alongside a dozen or so petrol filling spots. Long queues at busy gas stations could get longer if there is a significant boost to the diesel vehicle numbers.

From an environmental perspective a push to greater use of diesel could open up the market for biofuels in the UAE. Available at the same price point as regular diesel the biofuel variety comes with the added advantage of not having much in the way of carbon emissions. Biofuel company Neutral Fuels converts used cooking oil into biodiesel, and added Dubai Municipality to its growing list of customers in February this year.

“[Subsidy removal] has definitely increased the size of the target market for our biofuel.” said Karl Feilder, CEO of Neutral Fuels.

That government entities are getting behind the use of biodiesel may be a sign of things to come as the UAE cranks up pressure to make environmental changes and lets companies pay the real price for their consumption habits. Businesses that can tailor their usage to take advantage of the new price regime may, in the long run, earn themselves a bonus for their bottom line.