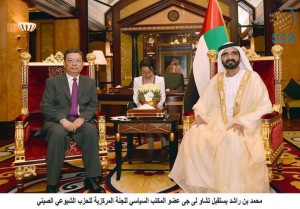 Welcoming Leji, Sheikh Mohammed expressed his confidence that  the visit of the top Chinese official would enable the UAE to open  new prospects for broader bilateral cooperation to serve both the  friendly countries and their peoples.

Sheikh Mohammed and Leji exchanged talks on a variety of regional and international topics of mutual concern, notably the tremendous and common challenge of combating terrorism. The meeting also recognised the importance of solidifying ties of cooperation and friendship between the UAE and the People’s Republic of China, particularly in areas of tourism and culture, both of which receive significant attention in public and private circles.

Sheikh Mohammed said Chinese companies operating in the UAE were receiving all kinds of care and facilities necessary to expand their business and investment operations.

The two parties also discussed the UAE-China Week to be hosted by Beijing next week and expected to attract nearly 150 Emirati participants seeking to promote the UAE’s attractions and strengths in the Chinese business and finance community.

The Chinese official lauded the UAE’s success in winning the bid to host Expo 2020 in Dubai, adding that Dubai would be able to host this international event with high professionalism, given its immense experience in organising and managing major world events.

More than 500,000 Chinese tourists have visited the UAE so far this year, a 20 percent increase over the last year. This proves the UAE’s appeal to attract tourists from around the world, mainly from October to May.