US greenback unchanged against Kuwaiti dinar 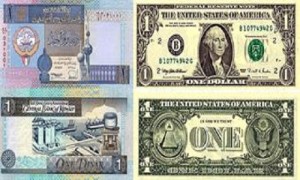 The US greenback was unchanged against the Kuwaiti dinar for exchange on Monday, as the Central Bank of Kuwait reported the rate still at KD 0.281 per dollar, while the euro was reported up from Thursday, coming to KD 0.387.
The daily price bulletin said the pound sterling was up to KD 0.474, while the Swiss franc stayed unchanged at KD 0.317 and the Japanese yen also stayed unchanged at KD 0.002.
In the US, Federal Reserve Chair Janet Yellen had recently stated the reserve board is keeping up the effort to bolster economic growth, particularly with inflation and unemployment rates still short of target.
As for Europe, the euro was at its highest levels against the US dollar, particularly buoyed by improved performance in the services sectors in France, Germany, Italy, Ireland, and Spain for the first time since May 2011.