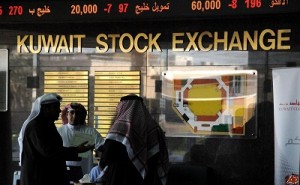 Last week operations at Kuwait Stock Exchange (KSE) saw traders’ behavior mixed between selective purchasing and random selling operations, said a report by Bayan investment company Saturday.
The report went on saying that KSE ended last week with mixed performance. The Price Index closed at 7,291.09 points, down by 0.76 percent from the week before closing, the Weighted Index increased by 1.06 percent after closing at 493.08 points, whereas the KSX-15 Index closed at 1,208.68 points up by 2.09 percent.
Furthermore, last week’s average daily turnover decreased by 3.72 percent, compared to the preceding week, reaching KD 21.14 million, whereas trading volume average was 149.26 million shares, recording an decrease of 12.25 percent.
Lots of small-cap stocks declined as a result to the selling pressures that targeted many of the same, especially the Real Estate and Financial Services stocks that declined the most during the week, however the selective purchasing operations that included many blue-chip and large-cap stocks, especially in the Telecommunications sector, formed a support factor for the Weighted Index and KSX-15 Index, to end the week with limited gains.
Kuwait Stock Exchange performance came among a dropped and declined liquidity levels, as it recorded in one daily session of the week its lowest level since August 2012, which pinpoint to the weakness that the market is suffering during this period due to the absence of the positive supportive motivators for the purchasing direction, and pushed a large segment of the traders towards selling and liquidating their stocks, especially the small-cap ones, to negatively affect the Price Index in particular, which declined in one daily session of the week to its lowest levels in around 8 months, to add-up to its annual losses, and reach 3.42 percent in the first five months of the current year.
On the other hand, the stock market is suffering this period from the decreased desire to trade by many investors, due to the absence of the positive motivators that support the purchasing activity, especially that most of the listed companies have already disclosed their first quarter financial results for the current year.