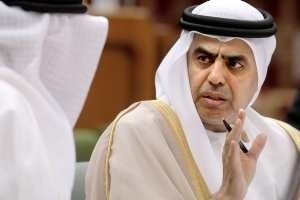 Al Tayer met with a number of finance ministers as well as the Fund and Bank’s international officials for the Middle East and North Africa region.

During the meeting, Younis Haji Al Khoori, Undersecretary of MoF and Khalid Ali Al Bustani, Assistant Undersecretary for International Financial Relations at MoF discussed the latest developments on implementing the top priorities Germany set in 2014 to be executed in 2015; which included promoting inclusive and sustainable growth, job creation.

During the meeting, the Ministers of countries in transition have been urged to provide and identify the priorities of each country in specific and coordinate with regional and international organisations in order to provide technical assistance and support these countries’ social reform.

Obaid Humaid Al Tayer, Minister of State for Financial Affairs met with Joaquim Vieira Ferreira Levy, Brazilian Minister of Finance; Alex Kilov, Argentinian Minister of Economy and Public Finance. Both meetings covered topics around the most prominent developments in the trade and investments relations between the UAE and the two countries, as well as ways to enhance these ties through agreements and promoting investments.

Al Tayer also met with Dr. Hazem El Beblawi, Executive Director of the Arab Group at IMF. Both parties discussed the most prominent topics that will be tackled by Christine Lagarde, Managing Director of the IMF in a meeting with the Arab countries’ delegations. Al Tayer stressed the need to unify Arab countries requirements to present them to the Fund in a timetable to facilitate follow up procedures.

He also pointed out the importance of raising the topic concerning that Fund’s support to infrastructure projects which aim to create jobs, reduce poverty rates in Arab countries.

Al Tayer met with Dr. Hafez Ghanem, Vice President of the World Bank for the Middle East and North Africa to discuss ways to strengthening bonds of cooperation between the UAE and the WBG. The two parties also covered the Bank’s new strategy on innovative funding methods for the Middle East and North Africa region. Al Tayer emphasised the need to talk over the programmes and initiatives with the Secretary General of the United Nations in order to unify perceptions among WBG and the United Nations on the strategy to then agree on the different elements of the strategy with representatives from Arab countries.

Al Tayer and Dr. Mirza Hassan, Executive Director of the Arab Group at the World Bank discussed the Bank’s technical support for UAE projects including programmes to strengthen institutional capacity and courts’ performance of Abu Dhabi Judicial Department, projects on competitive unit and focusing on the Abu Dhabi Economic vision 2030. The two parties also talked through the joint ventures with the Ministry of Finance (MoF) which include projects on the financial strategic framework, improving benefits of the Financial Management Information Systems (FMIS), MoF’s open data initiative as well as the project on the shift from a monetary system to a maturity transformation.

The Minister of State for Financial Affairs exchanged views with Dr. Masood Ahmed, Director of the IMF’s Middle East and Central Asia Department on the decision made during the 99th meeting of GCC Financial and Economic Cooperation Committee -which was held in October 2014. The decision included developing mechanisms to benefit from the IMF’s studies to unify visions as of 2015.

The two parties also discussed opinions of the ministries of finance and GCC Committee of Governors of Monetary Agencies and Central Banks, on the proposed topics which the IMF is carrying studies on for the GCC. These topics include: innovation development in the overall economy, tax policy in GCC countries, assess the impact of lower oil prices in GCC countries, specifically in terms of the impact on the financial stability and energy prices.

Al Tayer expressed his keenness to continue holding similar meetings alongside the annual meeting of WBG and IMF and invite officials to the reception for UAE banks which will be held at the Westin Lima Hotel on October 9, 2015.