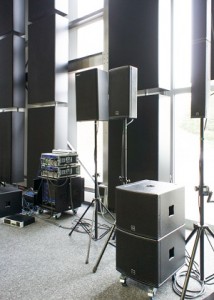 TW Middle East, TWME, a subsidiary of TW Audio Germany that manufactures high end professional speakers, has officially launched its UAE office in order to serve the wider Middle Eastern region. The pioneer of audio excellence is also reaching out to potential distributors in the region to better support its clients and enhance its product and service offering.

With the lucrative rise of the audio-visual industry due to iconic projects developed in the Middle East, including the anticipated Dubai Expo 2020, the introduction of TWME to the region comes at a time where advanced and professional audio precision is in high demand, not only for the end user but also for the Pro AV industry, events & av rental companies, consultants, system integrators, av installers, clubs, hotels etc..

“The Middle East region constitutes a huge and prosperous market, so we believe there is potential in this region for us to benefit and provide our products to people in this part of the world,” said Dr. Bernhard Wuestner, Co- Managing Partner, TW Audio Germany. “The UAE is the central hub for the Arab world financially and economically. It is the place to be, as it is easy to access other countries from Dubai and vice versa”.

Through its expansion plan, TWME will service the entire Arabian Peninsula including Bahrain, Iraq, Jordan, Kuwait, Oman, Qatar, Saudi Arabia, UAE, Yemen, and also Iran, Lebanon, and Syria. In the Arabian region, Pro Lab in the UAE, and Al Isteklal in Qatar are already official distributors.

“In the Middle East, the pro-audio industry is still in its infancy and is extremely decentralised,” said Farid Dagher, General Manager, TW AUDiO Middle East. “In terms of the market as a whole, the size of the pro-audio and pro-visual market accounts for roughly US$ 2.4 billion in the Middle East and is growing rapidly. We are looking at a 15% growth rate per year from now up until the Expo 2020.”

Considered among the top of the high end range of Pro Audio equipment in the world, TWME expects its market share to double in 2016 as it is already seeing its customers from its distributors to installers and event rental companies doing daily jobs in both small and large scale venues, recently covering Rita Ora’s event in Yas Island, the rooftop lounge at Kempinski Hotel, Etoiles at Emirates Palace in Abu Dhabi, Toy Room, Morjana Club, Cash Club, Purobeach, Asia Asia in Dubai, a wedding hall in Ajman, and many others.