It particularly accentuates OMEGA’s sponsorship of the team for the 35th America’s Cup, which will be held in 2017, as well as the preceding races in the America’s Cup World Series. OMEGA is the second largest sponsor of the team, after Emirates Airlines. 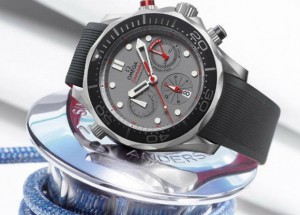 The partnership began in 1995, with Sir Peter Blake’s America’s Cup campaign, which was highlighted by the team’s win of the Cup and has continued ever since. The team also won the cup in 2000, making them a household name in their home country and in the world of sailing.

The celebratory timepiece, the Seamaster Diver 300M ETNZ, boasts a black ceramic unidirectional rotating bezel with a polished diving scale, whose indications have been created using laser ablation. A dot located at 12 o’clock has been coated with white Super-LumiNova, enabling it to emit green light.

The rigid dial has been created from sand-blasted titanium and features indexes that are also coated with white Super-LumiNova, emitting blue light in this case, different from the green light emitted by the dot at 12 o’clock.

Going further into the details of the dial, one can notice a silver chronograph seconds track, found on the outer edge of the dial, almost forming a three-dimensional inner line to the case. On the dial base itself, there are three inner sub-dials: a small seconds sub-dial located at nine o’clock, a 12-hour recorder located at six o’clock and a six-hour recorder located at three o’clock; this last sub-dial also indicates the five-minute countdown to the start of the regatta.

A 44-mm brushed titanium case embraces the dial and all of its useful functionalities. The case features a helium escape valve, coupled with an integrated date recorder, located at 10 o’clock. Additionally, there are two pushes on the case, located at two o’clock and four o’clock. The two o’clock pusher is distinguishable through a red aluminium ring, dealing with all the chronograph-related elements in the wristwatch, which share the same red marking colour; meanwhile, the four o’clock pusher stands out, with a matt black ceramic ring.

Finally, the Seamaster Diver comes with a rubber strap and a foldable case, emphasizing the functionality of the sporty watch. The top part of the strap is coloured in black and features a subtle ribbed pattern, while its underside is coloured red and boasts a unique design inspired by the sails of the team’s boat.