Vice President and Prime Minister of the UAE and Ruler of Dubai His Highness Sheikh Mohammed bin Rashid Al Maktoum announced the launch of the national campaign ‘Let’s Preserve the Legacy’ and extended an open invitation to the community to contribute historical items to the Etihad Museum, which will be officially inaugurated during the UAE National Day celebrations in December later this year. 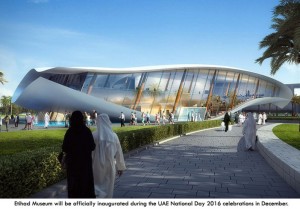 His Highness Sheikh Mohammed bin Rashid Al Maktoum emphasised that history is the most valuable treasure that we have, and our commitment to our country obliges all community members to participate in this initiative. In doing so, a valuable contribution will be made towards maintaining and preserving the UAE’s historical legacy. This will, in turn, inspire future generations to continue building what our founding fathers started when they established the foundations of our nation.

His Highness Sheikh Mohammed bin Rashid Al Maktoum said: “Etihad Museum is a national project, which serves to document an important part of our national memory, and tells the story of the historical journey that the UAE undertook to establish the Union. Our shared duty towards our country is to contribute to the documentation of this historical milestone, which marks the very beginning of the UAE’s glorious march towards progress. In addition, we should collectively support the effort to showcase historical objects related to the establishment of the Union of the United Arab Emirates.”

Through a unique visitor journey, Etihad Museum presents experience-driven exhibitions that include interactive educational programmes and exhibits that explore the chronology of events that culminated in the formation of the Union of the UAE in 1971, with a key emphasis on the period between 1968 and 1974. Through interactive exhibits and learning programmes, the museum tells the story of the Union’s creation from the perspective of the country’s leaders.

Commenting on the launch of the ‘Let’s Preserve the Legacy’ campaign, Mohammed Ahmed Al Mur, Chairman of the Advisory Committee of Etihad Museum said: “His Highness Sheikh Mohammed bin Rashid Al Maktoum’s initiative to launch the ‘Let’s Preserve the Legacy’ campaign will greatly enhance the museum’s collection – which will feature original source materials documenting the historical events of the creation of the Union. Public participation in this national campaign can be considered a national responsibility – for everyone from government bodies right down to individual members of the community. The initiative of His Highness is primarily aimed at documenting and commemorating the 2nd of December 1971, which was the keystone to the UAE’s foundation and its subsequent growth and development.”

Al Mur added: “We would like to praise the efforts of Dubai Culture in the ‘Let’s Preserve the Legacy’ campaign, and we call upon the public to actively support the Etihad Museum. The museum facilities will preserve exhibition materials, and will document and showcase them in a way that contributes towards preserving our history. This collective legacy will be a source of great pride to coming generations, and our shared past should be considered equally important to the prosperous present in which we now live.”

‘Let’s Preserve the Legacy’ campaign, which is managed by Dubai Culture, encourages all members of the UAE community to donate items which relate to the Union of the United Arab Emirates in 1971 – to be displayed in the Etihad Museum after its official inauguration during the UAE National Day celebrations.

The campaign is open to all members of the community, and will accept contributions in the form of historical photos and items related to the Union of the United Arab Emirates in 1971. Individuals and institutions can express their interest in contributing items by contacting Dubai Culture on Etihad.museum@dubaiculture.ae or (www.etihadmuseum.ae), 04-5155159.

Individuals who are interested in contributing items to support the Etihad Museum collection will be required to provide their contact information and details that identify items as an individual object or part of a series, a historical object, photograph, or media recording. The selection committee also requests a more detailed description including the item’s relevance to the Union and/or the historical events between 1968 and 1974, the approximate dimensions, the date it was made, the history of how it was made or used, and any other relevant details. High quality photographs should accompany each submission.

Through a unique visitor journey, Etihad Museum will present experience-driven exhibitions that explore the chronology of events that culminated in the formation of the Union of the UAE in 1971, with a key emphasis on the period between 1968 and 1974. Through interactive exhibits and learning programmes, the museum tells the story of the Union’s creation from the perspective of the country’s leaders. The experience also aims to educate visitors about the nation’s constitution, in particular the rights, privileges and responsibilities that it bestows upon the people of the UAE.

Dubai Culture is responsible for managing and supervising all of Dubai’s museum and heritage sites, as well as preserving their historical and cultural significance. Furthermore, the Authority oversees the museums’ daily operations, and the development of educational initiatives to enhance the learning experience. For this flagship UAE project, the Authority is responsible for the day-to-day management of the museum, the development of educational programmes, and the curation of permanent and temporary exhibitions.