Look at the flick of the wrist: BOMBERG 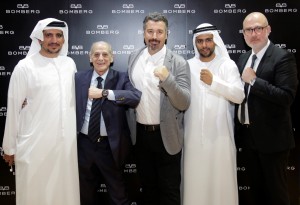 Swiss watchmaker known for unconventional and bold designs BOMBERG, along with Ahmed Seddiqi & Sons, unveiled its 2015 novelties to the region: BOLT-68.  At a sporty launch event held at Round 10 Boxing Club in Dubai, invited guests witnessed athletes wearing novelty watches including the highlight of the collection, BOLT-68 Falcon, during the martial arts and boxing show.

From Switzerland, where the movement, design and assembly of the watches were made, BOLT-68 Falcon transports us straight into the middle of an ardent desert.  Featuring the transformative ability of this classy and impressive timepiece, its time-keeping module is detachable and can be attached to a metal chain to become a pocket watch.  Celebrating the Arab tradition and culture, BOLT-68 Falcon also features a multi-layered falcon with Arabic numerals and diamonds around the bezel. 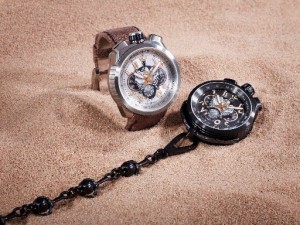 Speaking at the event, Mr. Rick De La Croix, Chairman of BOMBERG, said:  “With our creativity and innovative designs, we aim to create unusual timepieces that redefine the world of watches while keeping the authenticity of the classic Swiss watchmaking.  BOLT-68 opens new horizons to those with modern taste, and symbolizes force and courage synonymous to a falcon bird.”

With the company’s exclusive and patented bayonet system, which allows the timepiece to convert into a masculine pocket watch, BOLT-68 shortly became the major collection of BOMBERG after it was first launched at the recently-held Basel Fair.